LISTEN: 911 calls released from when boy fell into exhibit with gorilla at Cincinnati Zoo 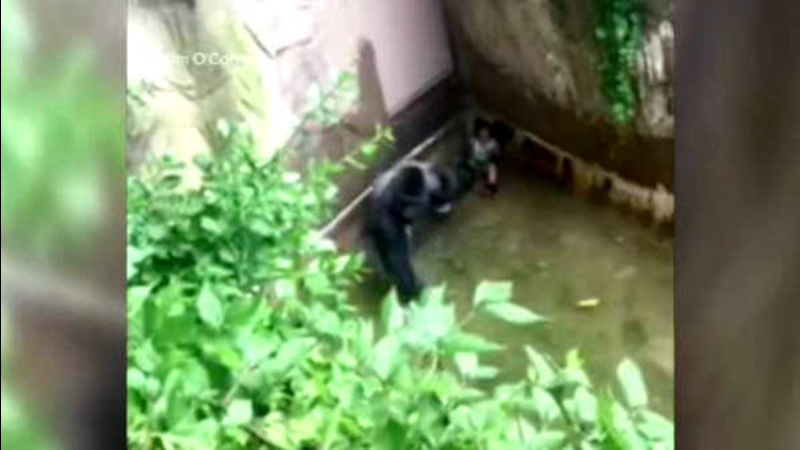 CINCINNATI (WABC) -- Authorities have released 911 calls made by the mother of a 3-year-old boy who fell into the gorilla exhibit at the Cincinnati Zoo.

"My son fell in the zoo exhibit at the gorilla, at the Cincinnati zoo my son fell in with gorilla, there is a male gorilla standing over him," the mother said. "Be calm, be calm," she calls out to her son, then saying "He's dragging my son, I can't watch this."

Listen to that call here:


And another woman gave a detailed description as to what she was seeing, describing a noisy scene:


The shooting has since sparked outrage from animal rights activists who claim the gorilla could have been tranquilized.

Police are now investigating the incident and the actions by the boy's family leading up to the fall.

A record of police calls shows nine minutes passed between the first emergency call about the boy falling into the enclosure and when the child was safe.

The summary of incident calls obtained by The Associated Press through a records request includes descriptions of the gorilla holding the boy on top of rocks in the enclosure and swinging the child back and forth.

The calls also show preliminary references to the child being a girl, a sign of the initial confusion around what had happened.

Cincinnati police say they are investigating actions by the boy's family leading up to the fall. They say they're not investigating zoo operations.

The boy's family says he is "still doing well."

The family released a statement Wednesday morning through a representative saying he just had a checkup by his doctor. They say they continue to "praise God," and are thankful to the zoo for "their actions taken to protect our child."

The family expresses thanks to those expressing concern and support. It says some people have offered money and they recommend a donation to the Cincinnati Zoo in Harambe's name.