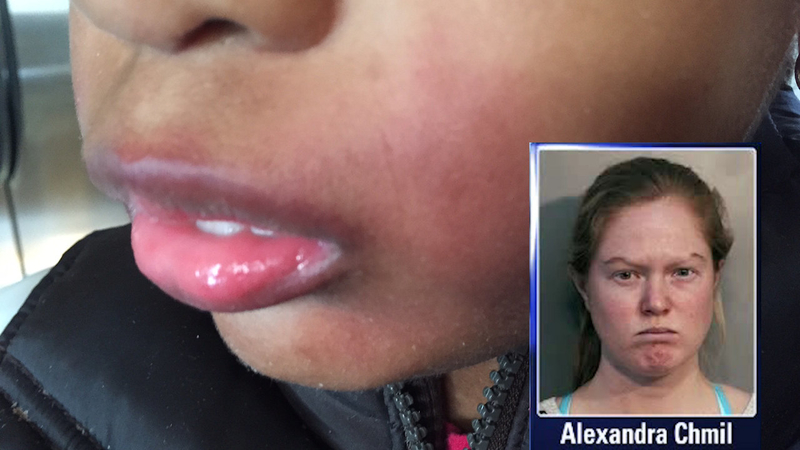 ROCKVILLE CENTRE, Long Island (WABC) -- A 25-year-old teacher's aide is under arrest, accused of abusing a 9-year-old physically disabled girl at a school on Long Island.

The alleged incident happened last May at the Hagedorn Little Village School in Seaford, and on Friday, Alexandra Chmil, of Garden City, surrendered to authorities in Woodbury.

On May 1, 29-year-old Joselyn Beltre noticed her daughter Krystal had arrived to their Rockville Centre home with redness and swelling on her face. The next day, she further observed her daughter's face had turned black and blue around her mouth.

Krystal can't speak because of a rare chromosome syndrome, but the bruises and abrasions on her face said plenty.

Beltre was understandably alarmed and reached out to the school, and after some prodding, she was shown about 20 minutes of surveillance video from inside the classroom that day. And it showed what she calls aggressive face wiping and even worse.

Beltre said the school has never had an explanation or an apology for what happened, and so she eventually went to the police and waited months for some kind of answer. Eventually, she said she had no choice but to turn to the media.

After news reports this week, Chmil, who hid her face from cameras Friday afternoon, turned herself in and was charged with first-degree endangering the welfare of an incompetent or physically disabled person.

Through her lawyer, she denied the charges and was released on bail.

The school, which said Chmil resigned about a month after the incident, released the following statement:

"We were distressed to learn that a former Teacher's Aide at our school may have turned herself into the police. We treated this matter very seriously and took all appropriate action when we learned of the allegations. We will cooperate fully with the authorities. Since opening in 1969, Hagedorn Little Village School has had an impeccable reputation and it is of the utmost importance to us to protect the well-being, safety and privacy of our students."

She let Krystal stay in the school after the incident, but has now decided to pull her out for good.

"I never got any type of remorse from the school," Beltre said. "None. I've been doing this all by myself."

She doesn't know what she'll do next, but after months of fighting for answers, she was visible relived to find out someone is being held accountable.
Related topics:
rockville centrechild abusedisabilitychild endangerment
Copyright © 2021 WABC-TV. All Rights Reserved.
More Videos
From CNN Newsource affiliates
TOP STORIES