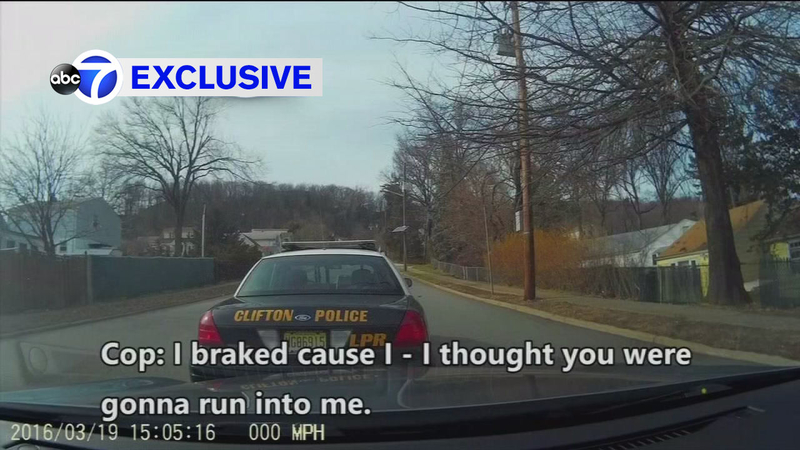 CLIFTON, New Jersey (WABC) -- It was the video watched by millions of people since Eyewitness News first told you about the story.

A police officer slammed on his brakes, but then gave the driver behind him a ticket!

Monday night, that driver was in court vowing to fight the charges he's facing.

Just moments before facing a judge, Omar B. told Eyewitness News he's nervous about challenging the word of a police officer in a court of law.

"The officer has no right to get into an accident with you. Period," he said.

In March, the college student captured dash cam video of a cop car stopping short in front of him.

Officer: How close are you going to drive behind me?
Omar: I was a car length away.

Omar: You brake checked me.
Officer: I braked cause I thought you were going to run into me.

Omar, who doesn't want us to use his last name, was cited for not having a front plate, dark windows and tailgating.

"There is a video recording, it speaks for itself," said John R. Klotz, Omar's attorney. "So compelling that there is no reason why the mayor and the City Council should not have acted more rapidly."

That video got more than 80,000 views on Reddit within days and sparked an internal affairs review.

At 7 Monday night, Omar's attorney and a prosecutor had a hearing to go over the evidence in the case.

It was there that Klotz informed the court that his client plans to file the necessary paperwork to later sue the City of Clifton.

"It's pathetic that you have to sue someone to get an apology people need to put aside their big ego," Omar said.

"No one, no representatives from the city, has offered an apology to my client," Klotz said.

Eyewitness News did not get a comment from the police department, but have been told in the past no comment because internal affairs matters are confidential.

The next court appearance for the traffic citations is July 11th.