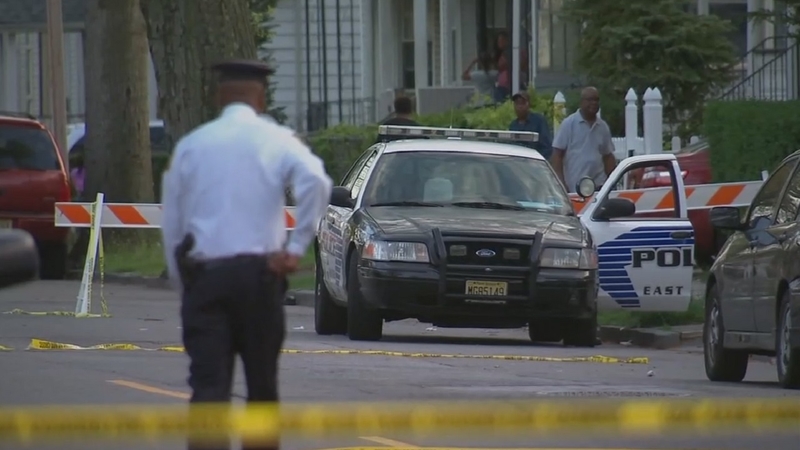 EAST ORANGE, New Jersey (WABC) -- A deadly shooting in New Jersey involving an off-duty officer may have been triggered by an armed robbery, family members say.

Officials are not saying much, only confirming that an off-duty officer fatally shot a man in East Orange. Multiple witnesses say there were two men shot - the sister of the man who survived says her brother had just come back from Wells Fargo, and that the officer is a hero.

Gunfire erupted on South Clinton Street around 1 p.m. Saturday. Neighbors poured into the street moments after those gunshots rang out. Officials say it was an off-duty Jersey City Police Officer who fired the shots, killing one man.

It was an emotional scene as a loved one collapsed during the chaotic and confusing moments that followed. The woman, who did not want to be identified tells Eyewitness News that her brother was also struck by a bullet, but will be okay. She says it was that officer who saved his life.

Neither man has been identified. In fact, officials are still only confirming one man was shot. They add that no one is in custody The circumstances that led up to the shooting are still unknown, it is not even clear at this hour if the officer was the only one who fired a shot.
Related topics:
east orangepolice shootingshooting
Copyright © 2021 WABC-TV. All Rights Reserved.
TOP STORIES
R. Kelly found guilty on all counts in sex trafficking trial in NYC
NY COVID vaccine mandate for health care workers goes into effect
'The View' chaos sparked by false-positive COVID-19 test results
Cheryl Burke says she has COVID-19
HUD deputy secretary tours NJ towns ravaged by Ida's flooding
5 people shot, 1 by an NYPD officer, in Upper Manhattan
Unconditional release approved for Ronald Reagan's shooter
Show More
Gabby Petito memorial service held on Long Island
Employees in NJ could earn extra $500 in new back-to-work program
In Ida's wake, NYC unveils blueprint to combat extreme weather
Showdown looms over vaccine mandate for teachers, NYC school workers
Biden receives COVID-19 booster shot
More TOP STORIES News