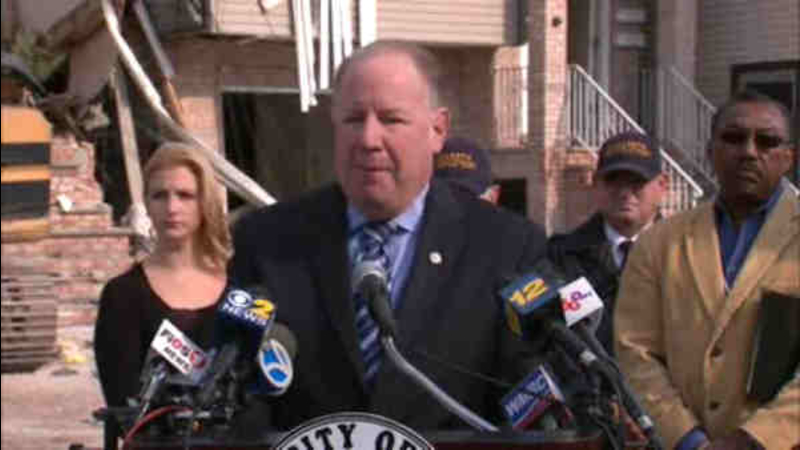 ELIZABETH, N.J. (WABC) -- The fatal gas explosion that occurred at a home in New Jersey on Wednesday was the result of a breach in the gas line in a building with an illegally converted unit, the city's mayor said Friday.

The blast happened at 8 a.m. Wednesday on Magnolia Avenue between Catherine Street and the Route 1 overpass in Elizabeth. A "gas episode" was the cause of the explosion, said Elizabeth Mayor Chris Bollwage.

One person was killed and 15 were injured. Officials said 24-year-old Femi Brown, who lived on the second floor of the house on Magnolia Avenue in Elizabeth, died in the blast that destroyed the house, and damaged adjacent and nearby buildings.

On Friday, Bollwage said investigators have determined that the ground floor of the house had an illegally converted home. Its electricity and gas were coming from a different unit, but exactly where they were coming from is still unclear. A breach in the gas line caused the blast, he said, but the origin of the blast is still undetermined. Many questions still remain, however, he said.

It is possible that the apartment was getting its utilities via "a bad connection or an illegal condition." Investigators still have not been able to access the rear of the ground floor.

Bollwage said a dryer was moved from a first-floor apartment at the end of September, and it is possible the gas line was not capped properly during that move. But he cautioned that there "are a lot of other possibilities," including a stove in an illegally converted ground floor unit.

He reinforced that that this definitely was not a carbon monoxide or propane episode, but a natural gas incident. Investigators and workers are still at the scene working to clear debris.

The building where the explosion occurred is a two-family duplex. The gas company was supposed to come to the first floor of the property on the Monday before the blast to turn on the gas, but when workers arrived, they found that the unit already was receiving gas, leaving more unanswered questions, according to the mayor.

Elizabethtown Gas explained what happened from that point on Monday.

"At that point, the technician did what Elizabethtown Gas does in such situations - he checked to confirm that the company's equipment was operating properly and safely. He found that it was. In the course of his work, the technician entered the first-floor apartment and spoke to the customer. No leak was reported to our technician, and he found no evidence of a leak while he was performing his work. Our technician also was not informed of the existence of the illegal apartment on the ground floor," said the company in a news release.

Bollwage said Friday that there are several discrepancies about when tenants smelled gas and who they discussed it with in the days leading up to the explosion. "No one ever called any emergency numbers on Monday or Tuesday to report gas," he said.

Bollwage said during the recovery, three dogs were rescued and some personal items were recovered from the scene during the past few days.