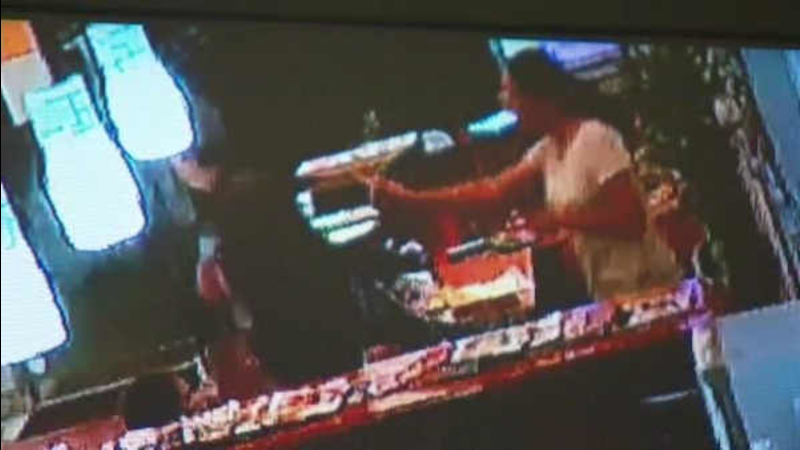 GREENWICH VILLAGE, Manhattan (WABC) -- A nail salon owner in Greenwich Village came face to face with a brazen robber armed with a gun, but refused to back down.

Video shows her grabbing the weapon and shoving it down the man's pants.

At 5'4", 120 pounds, you would think she would be no match for the 5'11" suspect who towered over her, but she says that when he flashed the weapon, she did whatever it took to keep everyone safe.

"Were you scared at any point?", we asked Annie Dheng, the owner of Penny Nails Spa. "No, I wasn't scared," she said wit a laugh.

After all, it was business as usual inside the spa Wednesday night at 8:30, even as the suspect walked into the salon in a dark hat and plaid shirt.

Surveillance cameras captured him standing at the counter.

A few seconds later, Annie walked towards him.

Then the seemingly harmless man asks an innocent question, "Are you the manager here?".

Annie tells me, she was stunned, tried to see what kind of weapon was stuffed in his waistband but her real concern was that 2 small children were playing right next to him.

There were also about 10 customers not far away.

"I just watched him and I say I don't give you nothing," she said.

She refused to hand over any money. At this point, Annie tells me, the man reached for the gun as if he was going to use it.

Annie, a petite powerhouse, wasn't having it.

"The first time I just used my hand to push back, I pushed the gun back and then I pushed him and he ran away," she said.

She can be seen on video chasing the suspect out of her shop.

"I heard screaming. I just was thinking someone had forgot to pay or something, I shook it off," said her 10-year-old daughter, Jasmine Chen.

Jasmine was in the back of the shop on LaGuardia Place and had no idea her mom had just told an armed robber to beat it.

"She should have done it but at the same time, it was dangerous," she said. "Are you proud of her?", we asked Jasmine. "Yeah", she said.

No one inside the salon was hurt. Asked if she would do it again, Annie said, absolutely.
Related topics:
greenwich villagenew york citynail salonrobberyarmed robbery
Copyright © 2021 WABC-TV. All Rights Reserved.
More Videos
From CNN Newsource affiliates
TOP STORIES