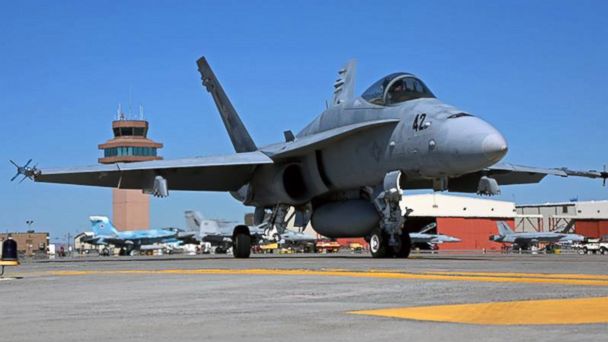 The pilot managed to eject and was transported to Banner Churchill Regional Medical Center. Officials did not release any further information on the pilot's condition.

The single-seater F/A-18C Hornet was on a routine training mission when it crashed, the Navy said in a statement, also noting that the cause is under investigation.

The jet, attached to the Naval Aviation Warfighting Development Center at Naval Air Station Fallon, was returning to base when the crash occurred, according to the Navy.

A similar incident occurred just four days ago when another F/A-18C Hornet crashed near Twentynine Palms, California, during a night training mission, killing the pilot, according to military officials.

And a pilot with the elite Navy Blue Angels flight team died on June 2 after his F/A-18A crashed outside Nashville, Tennessee, during takeoff. That crash occurred as the Blue Angels were practicing before the Great Tennessee Air Show in nearby Smyrna.

Hours earlier on that same day, an F-16 belonging to the Air Force's Thunderbirds demonstration team crashed just outside Petersen Air Force Base in Colorado Springs, Colorado. The pilot was able to eject safely in that case. The Thunderbirds had just participated in a flyover of the Air Force Academy's graduation ceremony, attended by President Obama.