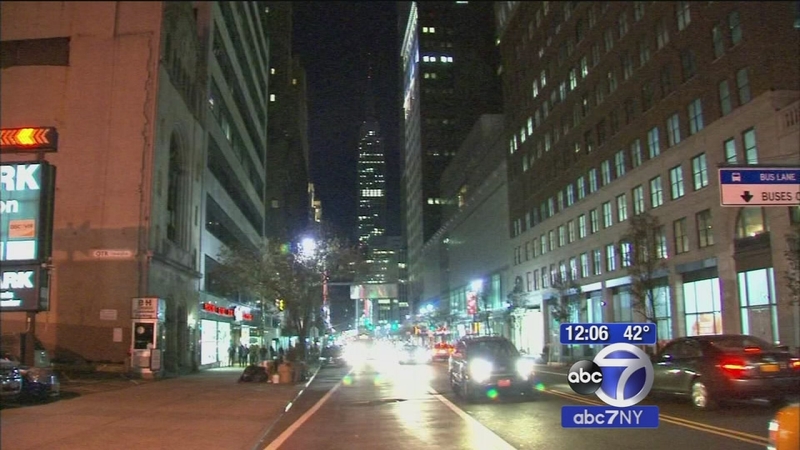 NEW YORK (WABC) -- Across the world, people gathered to pray for Paris. There were candlelight vigils, and tributes in major cities around the globe, all showing their solidarity with France. One of the more moving tributes took place in New York. The Empire State Building, normally brightly lit, was dark in remembrance of the victims.

The Empire State Building will go dark this evening in sympathy for the people of Paris. Photo: @isardasorensen pic.twitter.com/lHP6pCZdCo

Washington Square Park hosted a ceremony as well, and the arch was lit up in the colors of the French flag.

Only walk through #washingtonsquarepark tonight if you want to be overcome with emotions #standtogether pic.twitter.com/AR5HxHGyR2

Earlier in the day at Washington Square Park, hundreds came to pay their respects to the French people, led by the French Consul General.

Mayor Bill de Blasio also joined the throngs, and spoke of the need to stand in solidarity with our allies.

"We will do all we can to work with our brothers and sisters in Paris, and support them in every way," said Mayor de Blasio.

As the people of New York City moved forward in the dark days following September 11th, Mayor de Blasio offered to support the people of Paris as they now move forward.

"My advice would be to stay strong, and continue as much as possible life as normal to send a message to terrorists that they cannot win," Mayor de Blasio adds.

Throughout the afternoon, crowds continued to grow by the thousands, filling the park where New Yorkers now stand in solidarity with the people of Paris and France.