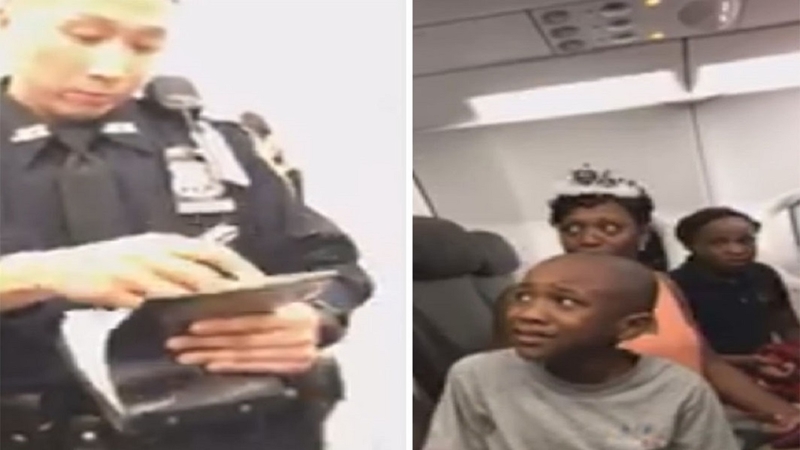 JERSEY CITY, New Jersey (WABC) -- There were tears and confusion on board a JetBlue flight at Kennedy Airport, after a family from New Jersey claimed they were kicked off the flight to Las Vegas over a birthday cake they brought onto the plane. But the airline is telling a much different story about what happened.

"We were just so happy, couldn't wait to get to Las Vegas," Minta Burke said. "And all of a sudden, this occurred, and my two children are screaming, crying. They're confused, not knowing what's going on. They were traumatized."

It was a surprise trip for Burke last week, booked by her husband Cameron. But the Jersey City family said there was another surprise that came with the flight, and it wasn't the kind you celebrate.

Burke's son is heard crying on the video, saying they followed directions and did nothing wrong. The violation that JetBlue claimed caused a security risk was apparently a birthday cake, initially stored in the overhead bin. A flight attendant told Cameron he had to move it, which he did, placing it under the seat. They said the situation then escalated when a second flight attendant confronted the first flight attendant, and whatever was going on between them, he said, wasn't pretty.

"You know, you could see the gestures, then she was pointing to her, 'did you tell him he couldn't put anything in the overhead compartment?' Cameron said. "I had approached them, and I said everything was fine. And she said, 'Sir, this does not involve you.' When she told me I had been non-compliant, then I said, 'Ma'am, had you been drinking?' Because her behavior was not normal."

Eventually, police at JFK Airport were brought on board. Then, an announcement was made saying everyone had to get off. Passengers were clearly seen taking the Burke family's side.

JetBlue released a statement saying, "(The customer) refused multiple requests from the crew to remove the items...became agitated, cursed and yelled at the crew, and made false accusations about a crewmember's fitness to fly."

"The passengers were very understanding," Cameron said. "They knew that this was a strange situation."

Cameron said he never cursed or raised his voice, and that at no point was his family told why they were being kicked off the plane.