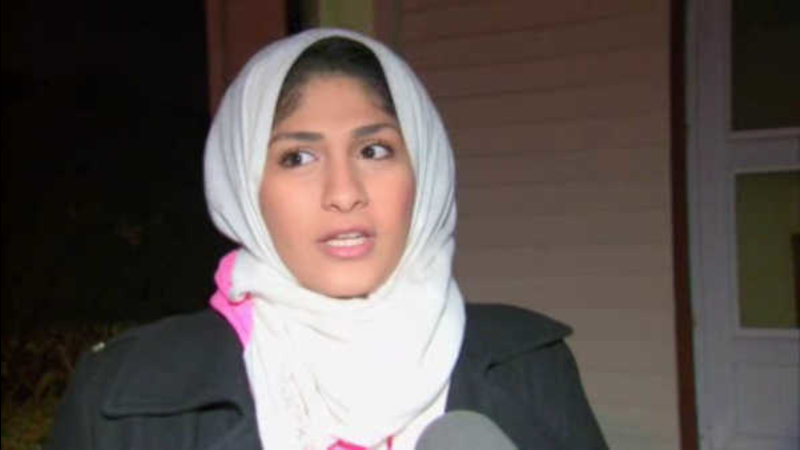 NEW YORK (WABC) -- 18-year-old Baruch College student Yasmine Seweid is recounting the ugly attack that happened on Thursday night. It was around 10 p.m. when the college student jumped on the 6 train to head home to New Hyde Park, when she noticed three young men in the car.

"It smelled like they were drunk. When they approached me, I smelled it, yeah, obviously they were drunk," Seweid said, "and before that they were talking really loud and laughing through my headphones, I heard them say 'Donald Trump'."

The Muslim woman says she tried to ignore them, but that was just the beginning of their disgusting assault.

"They said 'terrorist'. I was like 'okay, I'm not going to say anything. I'm minding my business. I don't want to get hurt', and after I didn't respond, they came closer and they were like, 'oh, look it's a f****** terrorist' right behind my ears." Seweid adds.

She says the men then grabbed her purse, breaking the strap.

"I was really scared. I was shaking," Seweid says.

She then moved to the other end of the car - but the men followed. They were not done.

"As they got closer, they said 'take that rag off your head, and then one of them reached for my hijab from the back, and tried to pull it off. I put my hand on my head, so it wouldn't fall off," added Seweid.

To add insult to injury, she says no one defended her.

"I looked at people and they just looked away, and that was the part that really hurt. Yeah, it sucks they're Donald Trump supporters, it happens, but I just never expected no one to stand up and say 'hey guys, cut it out!'"

Just as they tried to grab her hijab, the train arrived a Grand Central Terminal, and Seweid notified police. Officers are looking through surveillance video for images of the suspects.