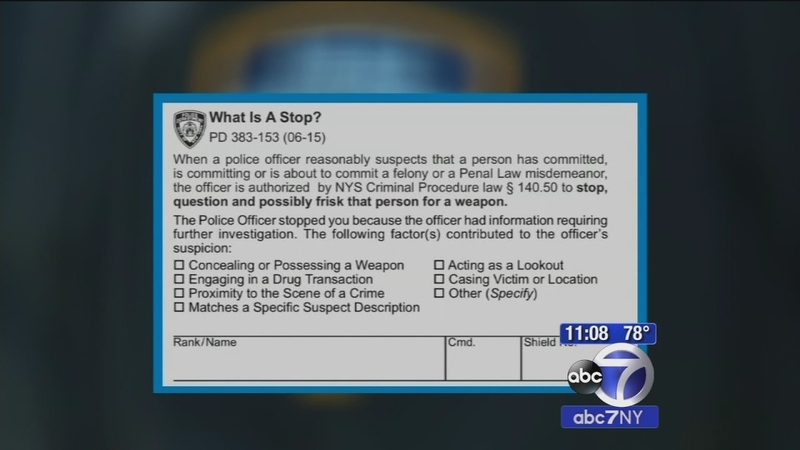 NYPD to start handing out recipts during 'Stop and Frisk' interactions

NEW YORK (WABC) -- The NYPD says the number of "Stop, Question and Frisk" encounters has plunged across the city.

"I still have a sour taste in my mouth with cops," a resident said.

But in neighborhoods like Crown Heights the resentment still runs deep.

In fact, pretty much everyone there has a story, or several.

"Before I hit 20 I was stopped and frisked at least 15 times," a resident said.

"To me personally, three times," another resident said.

"You know it makes no sense," one man said.

"What I was told is that I looked like somebody I didn't, and that's a classic line," another man said.

Tuesday, the police department announced officers will soon start handing out forms whenever they stop a person, but make no arrest.

On one side, the officer will write his or her name and shield number and the reason or the stop.

On the back, are phone numbers for Internal Affairs and the Civilian Complaint Review Board.

"In no way do I feel police should be handcuffed," another said.

But Tuesday night, the union that represents New York police officers said that's exactly what this plan does, by invite retaliatory complaints. "Just one more item," wrote PBA President Pat Lynch, "on the ever growing list of anti-public safety measures that will put an end to proactive policing in this city."

"A tense moment is when a civilian says to a police officer, 'What is your badge number?'" Adams said.

A former cop himself, he points out the receipts eliminate that tense moment, and says CCRB complaints have to be substantiated. If they're not, they're meaningless to the NYPD.

"If you are an active cop in a high crime area and you're doing your job and some bad guy wants to report you for doing your job, the PD has never held that against you," Adams said.

The federal monitor overseeing changes at the New York Police Department recently asked a judge to sign off on revised guidelines intended to make sure that street stops are lawful and to clarify a ban on racial profiling. The plan will go into effect on September 21st. It was approved by a federal judge on Tuesday.
Related topics:
new york citynypdstop and friskpolice
Copyright © 2021 WABC-TV. All Rights Reserved.
More Videos
From CNN Newsource affiliates
TOP STORIES