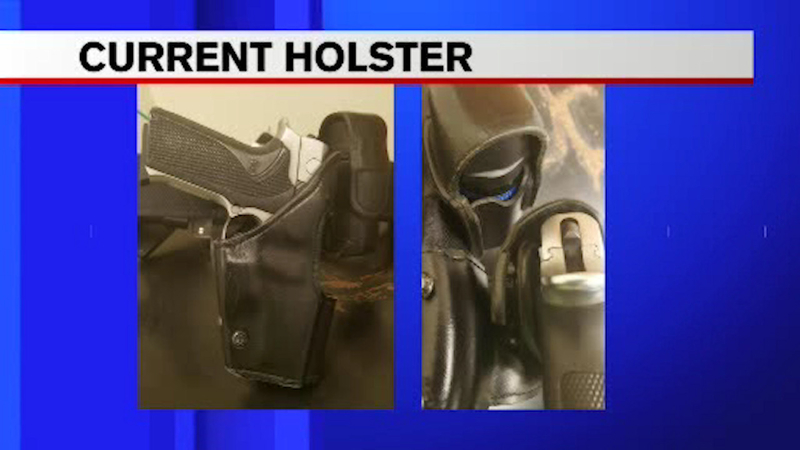 NEW YORK (WABC) -- How easy is it for a suspect to get their hands on an officer's weapon?

It turns out the department is in the process of transitioning to a new, more secure type of holster.

The SafariLand 6360 ALS gun holster with an automatic locking system is what the NYPD is transitioning to.

They say it's more secure and started issuing it to all new recruits in June of 2014.

It is not the one used by the patrol officer from the 52nd precinct, whose gun was stolen by a suspect Tuesday morning and used to kill an innocent bystander.

"Obviously we are going to review all the tactics involved. But looking at the video, Mr. Guzman made a very fast move and basically ripped the gun from the officer's holster," said Asst. Chief Larry Nikunen, NYPD.

Ripping a gun from a police officer's holster is not an easy thing to do, according to both investigators and Joe Giacalone, a former NYPD sergeant and adjunct professor at John Jay College of Criminal Justice.

"The NYPD snap holster is secure. It actually has two safety mechanisms in order for the gun to come out. So the thumb snap is one of them and the other mechanism allows the officer to get the gun out. You can't pull it out from behind, you can't pull it out straight up," Giacalone said.

Instead, it has to be rocked forward and removed. The holster locks with a strap and can be more easily removed, which is why the NYPD says it plans to phase it out over time.

"This is every cop's worst nightmare, someone getting ahold of your gun," Giacalone said. "The investigation is going to determine if this thing was either by accident or that the holster is defective."