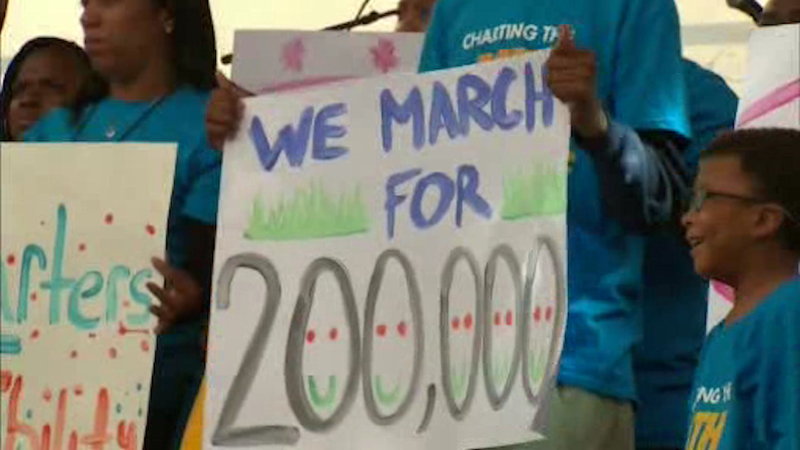 PROSPECT PARK, Brooklyn (WABC) -- Thousands of parents, students and educators were joined by rapper Common in Brooklyn Wednesday to call for New York City to double its public charter school sector to 200,000 students by 2020.

An estimated 25,000 school teachers, parents and students from all five boroughs descended on Prospect Park for the two-hour #PathToPossible rally and march, organized by the Families for Excellent Schools.

"It's just to incredible that we got so many of our families and, we don't really communicate so much with all of the schools," teacher Jackie Lenoff said. "But that all of us were able to gather, so many people, it's really incredible."

Organizers said they turned out not just to celebrate the success of charter schools, but also to call attention and call for more funding for charter schools.

The students in attendance were obviously skipping class, but parents said the education their children got at the Prospect Park rally was just as valuable as what they would have received in the classroom.

"It's the first time they've allowed the kids to attend these events, so I think it was a bigger education for them," parent Ulises Velazquez said. "Because they see now what charter schools mean to us as parents."

With more than 100,000 students in New York City public charter schools this year, Families for Excellent Schools believes that doubling the number of students would help erase the achievement gap that impacts many low-income children.

"I hope to make some politicians understand that we need schools like this around," one man said. "Every child should have this opportunity, not just a certain few. It should be every child's choice or parent's choice to come to the schools."

Hip-hop artist and civil rights activist Common may have been the highlight of the event. He not only spoke, but he also performed.

"You've been shown the love to be able to get into these schools and excel as a student," he told the crowd.