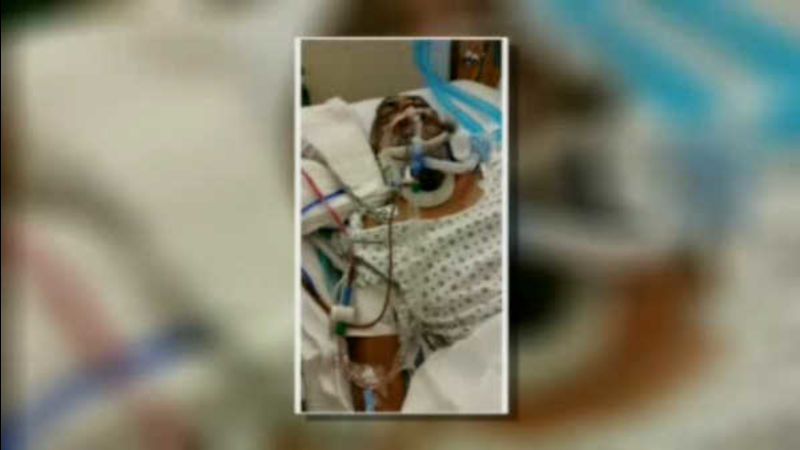 QUEENS VILLAGE, Queens (WABC) -- Police have released surveillance of two out of three suspects wanted in connection for beating a Muslim man while he was leaving a Queens mosque.

The NYPD released surveillance video of suspects in the beating of a man outside a Queens mosque.

59-year-old Mohamed Rasheed Khan is now fighting for his life after he was allegedly beaten by the three young men in Queens Village.

Khan has broken bones in his face, fractured ribs as well as a concussion. He can't speak, eat or open his eyes. His family says the alleged assailants broke more than his body - they've broken their faith in humanity.

"My uncle is an American citizen, and did not deserve this, and he is very humble and he doesn't bother anybody. He believes in Islamic ways - he was coming to pray, and Islam is all about love and caring for others. The criminals that did this, they don't identify with that," said Khan's niece, Asha Deopersaud.

It was 10:30 Wednesday night when Khan left the Center For Islamic Studies on Jamaica Avenue in Queens Village. He left with his friend, Zaman Alli. Khan was on his bike when Alli says he saw three suspects chase after him. Khan was wearing his traditional Islamic attire.

The alleged assailants, his friend says, did not steal a thing - they left him with his wallet, his watch and his bike. However, they did steal his sense of security.

Alli says they cold-heartedly laughed after they beat him, leaving him there in the street, clinging to life.

"I keep telling him to stay with me," Alli said.

The New York Chapter of the Council on American-Islamic Relations (CAIR-NY) is calling on the NYPD to investigate the attack as a possible hate crime, and is asking the NYPD to preserve any surveillance video that may help catch his attackers.
Community leaders say the attack is even more disturbing in light of the recent political atmosphere.

"Unfortunately rather than that diversity serving as the strength of our nation, it has been recently under attack with the political rhetoric that is occurring, which is really inciting more hatred and more viciousness," says CAIR-NY Executive Director Afaf Nasher.

The NYPD says they are not calling the attack a 'bias crime' as of now. The Hate Crime Task Force is also aware of the attack.