Pregnant woman shocked with Taser by police during Bronx scuffle 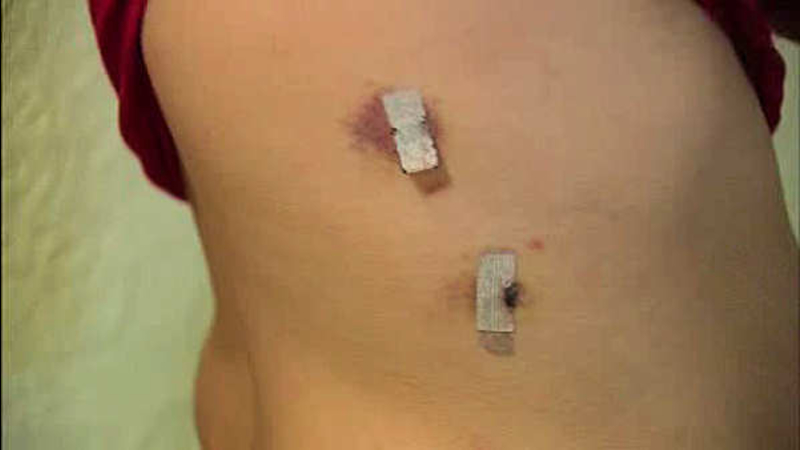 WAKEFIELD, The Bronx (WABC) -- A pregnant woman was hit with a stun gun by police in the Bronx, and the chaotic caught-on-camera scene played out in front of a group of outraged neighbors.

Dailene Rosario is 14 weeks pregnant right now, after delivering a stillborn baby at eight months back in September. And she says she is terrified how the incident will affect her child.

"It was more than enough cops to handle me," she said.

The video shows a sea of blue uniforms as three officers attempt to restrain the 17-year-old Rosario, before the sound a taser and more screaming.

"I was screaming I was pregnant the whole time," she said. "I was telling them, 'Get off me, I didn't do anything wrong.'"

The incident happened Friday in the hallway outside Rosario's family apartment on 242nd Street in the Wakefield section.

"They came from the third floor; a little kid got trapped in the apartment," she said. "This guy told them that they were fighting up here."

Rosario said her boyfriend and her sister's boyfriend, who are brothers, were arguing about a video game. They say when officers left their initial call and came up to their apartment, the commotion was already over. And they admit they asked officers for a warrant before allowing them inside.

"He said, 'Oh you're refusing,'" she said. "Next thing I know, he grabbed my arm and pulled me into the crowd of cops. Somebody was pinching me, and then I got tased...(my right hand) was already in the cuff, and then I ended up on the floor."

Rosario was struck on her right torso, and she is also bruised from when she fell the ground.

"We are aware of the incident," the NYPD said in a written statement. "It is under internal review."

Rosario was charged with resisting arrest, disorderly conduct and harassment.