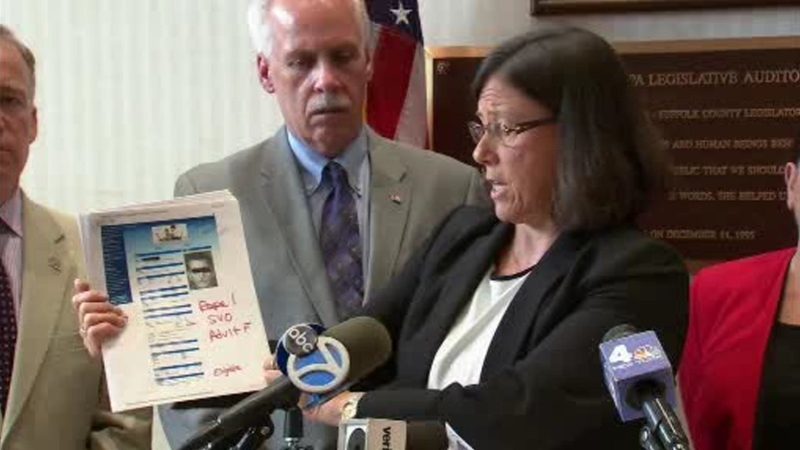 HAUPPAUGE, Long Island (WABC) -- A proposed bill would allow Suffolk County to opt out of ride sharing until the state addresses the issue of level one sex offenders being allowed to drive for ride sharing services, like Uber and Lyft, if their convictions were more than seven years ago.

There is strong support for the bill from Suffolk County legislators and Parents with Megan's Law.

They held a press conference Thursday.

"Our issue is not with Uber, Lyft. The law has a loophole and that loophole has to be fixed in order for our community to be safe," said Laura Ahearn, Parents for Megan's Law.

The loophole is a potentially dangerous one.

Under the recently approved New York State law regarding ride sharing, level one sex offenders who committed their crimes more than seven years ago are eligible to be drivers for services like Uber and Lyft.

"Level one offenders can be offenders who are convicted, and registered sex offenders convicted of raping and sodomizing a 23-year-old female," Ahearn said. "Forcibly raping a 4-year-old, here's another sodomy first degree against a 9-year-old, another one sexually abusing a 5-year-old."

Thursday, Suffolk County Legislator Leslie Kennedy announced a bill that would allow Suffolk County to opt out of ride sharing until the state addresses the level one sex offender issue.

"The vetting is not sufficient, the stats on sexual predators and recidivism are not comforting," said Kennedy, (R) Nesconset.

A spokesperson says he supports the effort to close this loophole and is considering allowing a vote on Kennedy's bill.

"I don't know how in good conscience you can jump into something without knowing all the safety concerns that are behind there," said Legislator Kevin McCaffrey, (R) Lindenhurst.

If Bellone does not approve a vote on Kennedy's bill for Tuesday, it won't happen for at least another month.