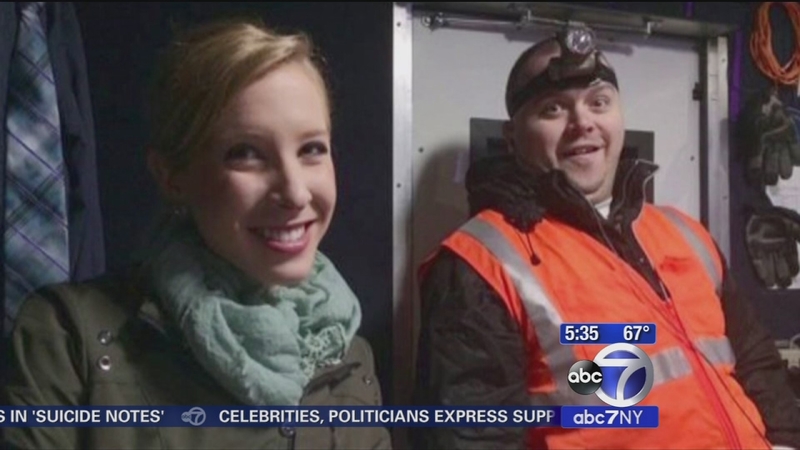 ROANOKE, Va. -- They were two young journalists, eager and hungry for a story, fulfilling their dreams of working in TV news.

Reporter Alison Parker, 24, and cameraman Adam Ward, 27, grew up in the Roanoke, Virginia, area and started their television careers there, becoming local celebrities in the process and finding love along the way.

On Wednesday, the two were following their passion when they were gunned down by a disgruntled former reporter they once worked with at WDBJ. The shots rang out in the middle of a live story about the 50th anniversary of a reservoir known as Smith Mountain Lake. The attack was captured on Ward's camera.

In their work, the broadcasters were "full of smiles and full of exuberance," said Jeffrey Marks, general manager of the Roanoke station.

The pair worked as a team for the station's "Mornin'" show, a time slot where many broadcast journalists get their start. They covered everything from breaking news to feature stories about child abuse.

"She took on the morning live reporting job with great excitement and vigor," Marks said. "Nobody could have done it better."

Parker said in a promotional video for the station that the "most thrilling" thing she ever did was take a trip to the Grand Canyon with her family and ride horseback down the canyon. She enjoyed the arts, playing trumpet and French horn in high school. And she loved Mexican food.

"The spicier, the better," she said in the video.

Ward, who played high school football, was a devoted fan of his alma mater, Virginia Tech. He rarely, if ever, missed a game, and was a "happy-go-lucky guy" - even during the early morning hours.

"He was the kind of guy you wanted to be around, especially at three in the morning," said Jay Webb, a former meteorologist at WDBJ.

Robert Denton, head of the communications department at Virginia Tech, said he handed Ward his diploma when he graduated from the Blacksburg school in 2011.

"He was quite a talker, and he loved sports and politics," Denton said. "You could not be around him and not have a wonderful conversation."

Both Parker and Ward grew up in the Roanoke area, attended high school there and later interned at the station. After Parker's internship, she moved to a smaller market in Jacksonville, North Carolina, before returning to WDBJ.

Their television jobs made them stars in the community.

One of their more playful morning-show stories was about a local theater production of "Cinderella." Parker, dressed in costume, can hardly control her laughter as she invites Ward out from behind the camera. He appears in high heels and a dress as the "wicked stepmother" to both their delight.

Both of them also found love at the station. Ward was engaged to producer Melissa Ott, who watched the shooting unfold live from the control room. Her last day was supposed to be Wednesday because she had accepted a new job in Charlotte, North Carolina.

Parker was dating an anchor and had just moved in with him. Her boyfriend, Chris Hurst, posted several messages on Twitter and Facebook.

"She was the most radiant woman I ever met," Hurst wrote. "And for some reason, she loved me back. She loved her family, her parents and her brother."

Recently, Parker had tackled a tough story on child abuse. But she also had a less serious side: Her Facebook feed was punctuated with funny videos and photos of her smiling, ear-to-ear, often while on assignment with Ward.

Her father, Andy Parker, said the family is devastated.

"I go from shock and just not believing to realizing that it happened and just crying my eyes out," he said in an interview at his home in Collinsville, Virginia.

He was proud of his daughter's journalistic ethics, recalling that police in Jacksonville would give her scoops because she showed herself to be trustworthy about not breaking embargos or reporting off-the-record conversations.

He said she graduated from James Madison University in 3 years and had wide interests ranging from whitewater kayaking to ballet.

"She excelled at everything she did," he said.

Remembering her skills in English and spelling, he said classmates called her the "grammar queen" because she would always correct people's grammar.

Parker said Flanagan got fired before his daughter started at the station full time and that she never mentioned having any problems with him.

He said he's not against gun ownership in general, but he supports tougher background checks and now plans to start advocating for them.