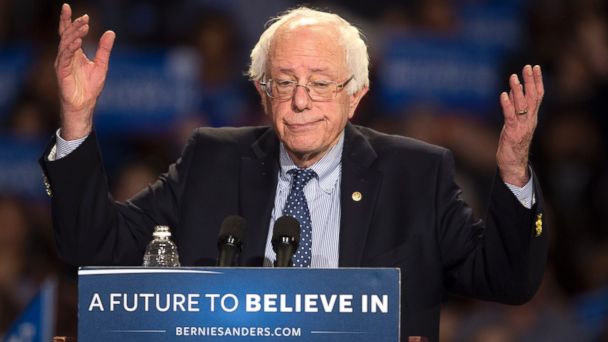 During a fiery press conference in Boston this afternoon, Bernie Sanders went after Hillary Clinton and her super PAC for their fundraising tactics.

"Maybe they're dummies and maybe they just think they can throw millions of dollars at a candidate and expect to get nothing from that. Maybe. I doubt that very much," he continued.

While Sanders has made similar insinuations about Clinton in the past (and has been accused by her of running a negative campaign of innuendo), today he was more forceful and blunt than he has been recently. He even named Clinton's super PAC, Priorities USA, explicitly and spoke about how much money both Clinton and her super PAC have raised from Wall Street.

Sanders also joked about what he sees as Clinton co-opting some of the issues he has been pushing. He questioned her sincerity and commitment to some of her new positions, such as her opposition of the Trans-Pacific Partnership.

"I have to say that I am delighted that Secretary Clinton, month after month after month, seems to be adopting more and more of the positions that we have advocated. That's good," he said. "But the people of Massachusetts and the people of the United States need to know the difference between hastily adopted campaign rhetoric and the real record and the long-held ideas of the candidates."

Within the Sanders' campaign there has been, almost since the beginning, disagreements about just how much and how boldly to attack Clinton. Today at least, the more hard-hitting side seemed to be winning. The campaign sent out a sharp tweet an hour before Sanders' press conference poking Clinton for still failing to release transcripts of her paid speeches, raising questions as to whether Sanders is now transitioning to a more offensive campaign following his loss in Nevada over the weekend.

While Sanders spent the morning in South Carolina, where the next Democratic primary is slated for Saturday, he is now turning most of his attention to Super Tuesday states such as Massachusetts, Michigan and Colorado, where he thinks he can still be competitive.