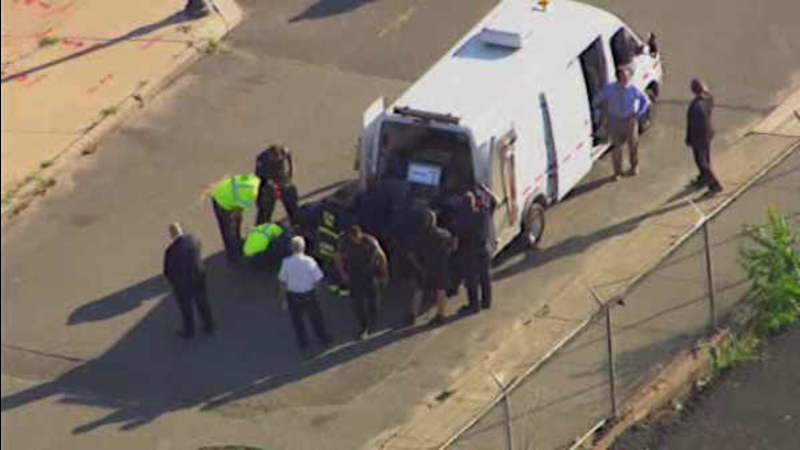 NEWARK, New Jersy (WABC) -- A suspect who jumped into the Passaic River and climbed into a storm drain to avoid capture has not been found, police said Thursday.

Newark Public Safety Director Anthony Ambrose said the rescue effort will now be a recovery mission because no one has seen the man get out. He said the suspect may have gotten trapped in the drain by rising water.

Officials said the suspect jumped into the river to avoid capture by Harrison police during a vehicle stop Wednesday.

Police said the suspect swam across the river, climbed onto a support on a bridge, jumped back into the river, swam to the storm drain and went inside.

Ambrose said the drain had 8 feet of water in it and gases.

The lower portion of the Passaic River, which runs between Newark and neighboring Harrison and empties into Newark Bay, is heavily contaminated from decades of industrial activity, including from a factory that produced Agent Orange in the 1960s. It is the focus of a recently announced $1.4 billion cleanup effort.

Catching crabs is prohibited, as is consumption of fish and crab taken from river, according to the federal Environmental Protection Agency.

There was an all-out search by police, on the Passaic River and on land in Harrison and neighboring Newark, as seen from Newscopter 7.

"Like I seen out of a movie, which is crazy, three helicopters. I felt like I was in Miami Vice, literally," said Demitri Merced, an eyewitness.

Merced was pumping gas while watching the search efforts.

Police tell Eyewitness News the man in a car was stopped by police on the Harrison side of the river.
He then fled and took off running across the Bridge Street Bridge.

Suddenly, they say he jumped into the Passaic River to avoid capture.

He then was holding on to a support on the underside of the bridge.

"Hey man, it's dirty Jersey. People do crazy things to survive. It is what it is," Merced said. "They couldn't find him, from what I heard he was hiding in the sewer pipes, in the sewer lines."
As Newark Police and Fire put a boat into the water, the man jumped back into the river and was seen swimming to a large storm drain on the bank and walked inside.

Newscopter 7 captured video as special camera equipment was sent into manhole covers in Newark in hopes of finding the suspect.

The search was suspended for the night Wednesday, but resumed Thursday. Newark Police had said that with the high tide, it could turn from a search to a recovery.