WABC
In a landmark announcement, Bob Dylan was awarded the Nobel Prize in literature, marking the first time someone primarily considered a musician received the honor.

The Royal Swedish Academy of Sciences made the announcement on Thursday morning. Though Dylan has been considered a contender for years, experts did not expect the committee to extend their definition of literature to popular music.

Earlier this week and last week, Nobel Prizes in economics, chemistry, medicine and physics were announced, as was the Nobel Peace Prize. Take a look at all the laureates being honored this year.

BREAKING 2016 #NobelPrize in Literature to Bob Dylan “for having created new poetic expressions within the great American song tradition” pic.twitter.com/XYkeJKRfhv

What did he do? He won, according to the committee, "for having created new poetic expressions within the great American song tradition."

Why is it important? Dylan is the first person primarily considered a musician to receive the award. Sara Danius, the Permanent Secretary of the Swedish Academy, cited Dylan's poetic and artistic talents as the reason he received the award.

What did they do? They developed a framework for analyzing contracts.

Why is it important? As the Nobel committee explains, "Their analysis of optimal contractual arrangements lays an intellectual foundation for designing policies and institutions in many areas, from bankruptcy legislation to political constitutions." This means their work is taught in economics, law and politics classes, a member of the committee explained.

Who won? Juan Manuel Santos, the president of Colombia.

What did they do? Santos is known for his efforts to end a half-century conflict in Colombia. Last month he signed a peace deal with Rodrigo Londono, the leader of the Revolutionary Armed Forces of Colombia. Though the referendum was narrowly defeated, the Norwegian Nobel Committee stressed that this does not necessarily mean the efforts to reach a peace deal are over.

Why is it important? The 50-year civil war has resulted in 220,000 lives lost, and almost 8 million people have been displaced. The Norwegian Nobel Committee said, "The award should also be seen as a tribute to the Colombian people who, despite great hardships and abuses, have not given up hope of a just peace, and to all the parties who have contributed to the peace process."

Who won? Jean-Pierre Sauvage (of France), Sir J. Fraser Stoddart (of Scotland and the U.S.) and Bernard L. Feringa (of the Netherlands).

What did they do? They designed and developed tiny molecular machines, which can move and perform a task when energy is added.

Why is it important? These machines, which the Associated Press describes as "1,000 times thinner than a human hair," are leading the way in a revolution in molecular technology. The Royal Swedish Academy of Sciences compares their development to the progress of the electric motor in the 1830s, which eventually led to inventions like the electric train. The academy says molecular technology could be used to develop "new materials, sensors and energy storage systems."

Read more about the chemistry award.

What did they do? They conducted theoretical work in strange, unexpected states of matter.

Why is it important? These three Laureates' work challenged conventional thinking in topology, a branch of mathematics that focuses on the properties of objects. Their findings astounded experts, according to the Nobel Prize press release. Scientists are hopeful that their work will one day pave the way to improved materials in electronics, including the creation of quantum computers.

Who won? Yoshinori Ohsumi (of Japan). 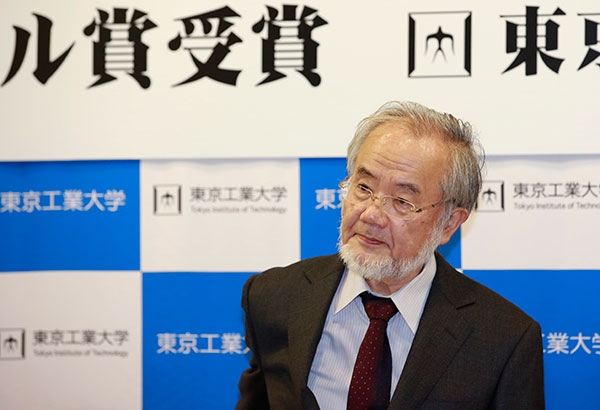 Nobel Prize winner Yoshinori Ohsumi arrives at a press conference at the Tokyo Institute of Technology in Tokyo Monday, Oct. 3, 2016.

What did he do? He explained the process through which cells can recycle their waste, called autophagy.

Why is it important? When autophagy functions abnormally, it can result in diseases such as cancer, Parkinson's and Type 2 diabetes. A better understanding of autophagy may lead to better treatments of diseases like these.

Read more about the medicine award.

The laureates will travel to Sweden in December to receive their prizes.