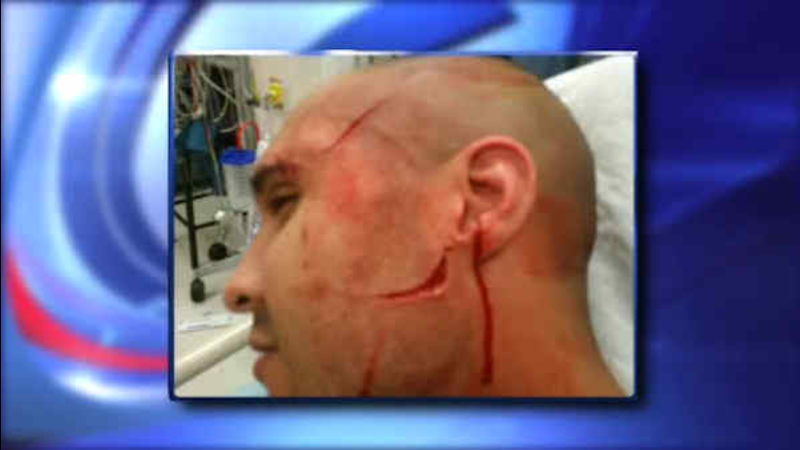 NEW YORK (WABC) -- The correction officer who was attacked and slashed by two inmates at Rikers Island is speaking out Monday, appearing at a rally as law enforcement officers and public officials push for changes to New York City's use-of-force guidelines.

Ray Calderon was ambushed and put in a chokehold last week before being slashed on the head, face and wrist.

"I could have passed out," he said. "This could have been my funeral."

The passionate rally was held on the steps of City Hall by officers who stand behind the 31-year-old Calderon.

"I was choked from behind as hard as the guy could choke me, and I was slashed in the face numerous times," he said.

The Correction Officers Benevolent Association has filed for an injunction that would halt new DOC guidelines set to take effect soon that prevent officers from hitting inmates. It also ends solitary confinement for inmates ages younger than 21.

The two inmates who attacked Calderon were ages 18 and 19, and at least three of the four people charged in the incident were repeat offenders in attacks on officers.

Officers also complain that with all of the reform going on at Rikers, they're not a part of the discussion.

"We have a new administration that discovered Rikers Island two years ago," state Senator Diane Savino said. "They brought in a commissioner who instituted changes there. We call it the 'hug a thug' program."

The union is calling for the city to delay the new guidelines in the wake of the violent attack, as well as for administrative changes.

"This administration is tone deaf when it comes to running real jails in the city of New York," Seabrook said. "(DOC Commissioner) Joe Ponte has got to go."

Mayor de Blasio's press secretary released a statement saying, "From developing a sophisticated inmate classification tool to adding camera coverage to expanding officer training, Ponte's top-to-bottom reforms were developed in close consultation with the department's officers, wardens, captains, and leadership. DOC's new Use of Force policy was also drafted with significant contribution from uniformed members of staff from across the Department and other bodies, including the unions and the Board of Correction."
Related topics:
new york cityinmatescorrection officerrikers islandprison
Copyright © 2021 WABC-TV. All Rights Reserved.
More Videos
From CNN Newsource affiliates
TOP STORIES