WABC
NEW YORK (WABC) -- Details are continuing to emerge about the man accused of bombings in Chelsea and Seaside Park and an attempted bombing in Elizabeth.

Sources tell Eyewitness News that Ahmad Khan Rahami rode a train into Manhattan and placed the pressure cookers in Chelsea while possibly carrying the pipe bombs in his backpack. He then took the train back to Elizabeth, where he allegedly dumped the backpack containing the pipe bombs in a trash can near the train station.

Meanwhile, Rahami's father reportedly informed the FBI in 2014 about his son's apparent radicalization.

Speaking to The Associated Press early Friday in a telephone interview, Mohammad Rahami said his son underwent a personality shift after visiting Afghanistan and Pakistan in 2013. Speaking in Urdu, Rahami said his son was not the same after that trip.

"I found a change in his personality," he said. "His mind was not the same. He had become bad and I don't know what caused it but I informed the FBI about it."

The elder Rahami said he doesn't think the FBI took any action against his son at the time. He said he and his family were in a state of shock following last weekend's blasts, which injured 31 people.

Ahmad Rahami, an Afghan-born U.S. citizen was shot and severely injured during his arrest Monday. He has been unconscious and intubated for much of the time since undergoing surgery, said Robert Reilly, a spokesman for the FBI's Newark office.

On Friday, the Rahami family left their home above the First American Fried Chicken restaurant in Elizabeth around 10 a.m. They piled into the family Chevrolet Suburban and were escorted by a law enforcement vehicle, a Dodge Charger with flashing lights, as they pulled out.

It is unknown where they were traveling. They are not in custody and are not being taken anywhere by law enforcement.

"The family is free to exercise any travel they want," according to a law enforcement official.

Prosecutors say Rahami, 28, planned the explosions for months as he bought components for his bombs online and set off a backyard blast. They say he wrote a journal that praised Osama bin Laden and other Muslim extremists, fumed about what he saw as the U.S. government's killing of Muslim holy warriors and declared "death to your oppression."

Criminal complaints in Manhattan and New Jersey federal courts provided chilling descriptions of what authorities say drove the Afghan-born U.S. citizen to set off explosives in New York and New Jersey, including a bomb that injured over two dozen people when it blew up on a busy Manhattan street. 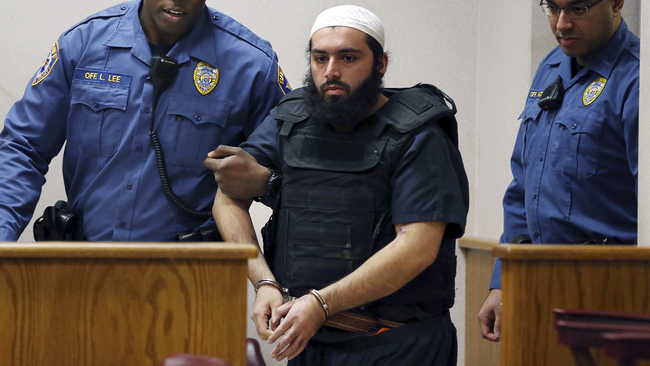 Chelsea bomber sentenced to life for shootout with NJ police