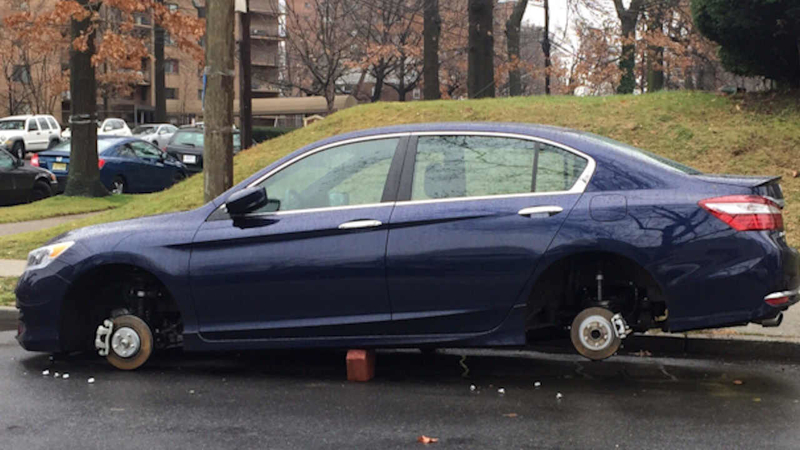 NEWARK, New Jersey (WABC) -- Police are investigating a tire theft spree in Newark, after thieves used cinder blocks to prop up cars, then stole their wheels.

Newark police received the call Monday morning of the thefts on Mount Prospect Avenue in the North Ward.

At least three cars, all Honda Accords, were found to have been vandalized.

One car owner said his neighbor told him that she went out to her car at 4 a.m. and that the wheels were still on his car, otherwise she would have noticed.

He said he just got his car three weeks ago.

"They did a professional job, they took the wheels right off, they really didn't do any damage to the car," said the car owner, who did not want to be identified.
Related topics:
newarkauto thefttheftnew jersey news
Copyright © 2021 WABC-TV. All Rights Reserved.
TOP STORIES
Suspect fatally shot by agents during kidnapping investigation in NJ
NYC ready to move homeless out of hotels, back to shelters: Mayor
Violent, multi-vehicle crash leaves 2 dead, 3 injured in NJ
What to buy and what to skip on Amazon Prime Day
NYC to hold vaccination contest for $2,500 prizes in July
COVID Updates: Delta labeled a 'variant of concern' by CDC
80-year-old rescued, 3 hurt as flames shoot from NYC apartment building
Show More
NYC renames parks to honor Black American experience
LIVE: Putin addresses Russia after hours of talks with Biden
MacKenzie Scott's $2.7B donation: At least 8 NY area recipients
AccuWeather: Dry delight
Man wanted for brutally beating man in head with cobblestone
More TOP STORIES News