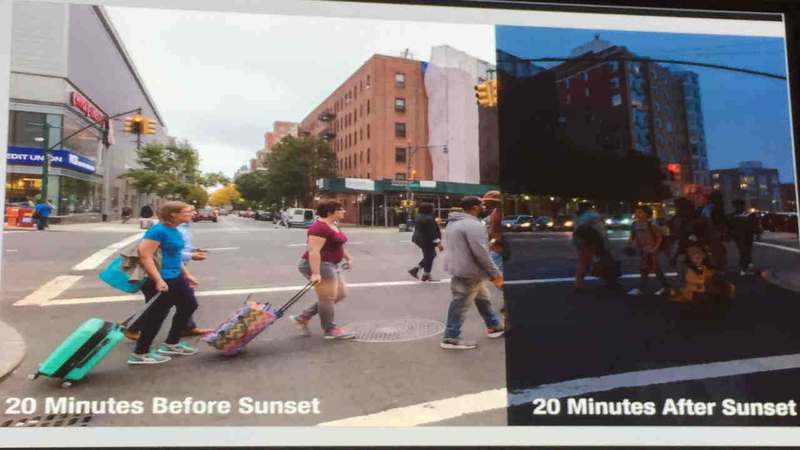 UPPER EAST SIDE, Manhattan (WABC) -- A new system for tracking pedestrian deaths was unveiled Tuesday, part of the "Dusk and Darkness" initiative.

The effort, announced in October, is designed to make drivers more alert at rush hour in December, when pedestrian fatalities are triple those in August.

A look at the new statistics tracker:

With the holiday season, you can expect more people in the city. More pedestrians, more cars.

The expansion of Vision Zero since 2014, Mayor de Blasio claims, is starting to yield important results.

"That focus enforcement had a big and positive impact," said the mayor. "It helped us to reduce the number of fatalities in this sensitive time of year when people are driving more in darker hours."

But accidents still occur, the latest victim a 66-year-old female pedestrian, who was critically injured when she was struck by an SUV while crossing the street on the Upper East Side Monday night.

But in the past 28 days, the numbers are down.

"We have had a double digit decrease in fatal collisions," said NYPD Commissioner James O"Neill. "The raw number is 14 this year versus 30 last year."

In high traffic areas, the NYPD will be using various driver checkpoints. There will be pedestrian and bicycle initiatives aimed at awareness too.

And now for the first time, the NYPD is offering Traffic Stat, an online site where you can track accidents and trouble spots in all five boroughs.

"Essentially to give the public the tools that they need to view, map and analyze NYPD collision numbers," said Deputy Commissioner of Information Technology, Jessica Tisch.

You can track those numbers in various ways and over various time periods.

"We see our highest volume, this is in Manhattan North last week, of 69 occurred on Wednesday," said Tisch. "If we look by collision type we see the majority were sideswipes."

The stats are upgraded as reports come in to the NYPD.

The DOT is also running an ad campaign in English and Spanish, especially during the dangerous drive times.

"And we've introduced some new compelling 15 second TV spots to amplify the enforcement message," said DOT Commissioner Polly Trottenberg. "And if you were watching political coverage or football on ESPN, you probably have seen some of these ads."

The NYPD has issued more than 50,000 summonses for hazardous moving violations during the Dusk and Darkness initiative, said Commissioner O'Neill.

"The NYPD and its Vision Zero partners are reminding New Yorkers, especially motorists, to slow down, make safe turns and to never drink and drive," he said.