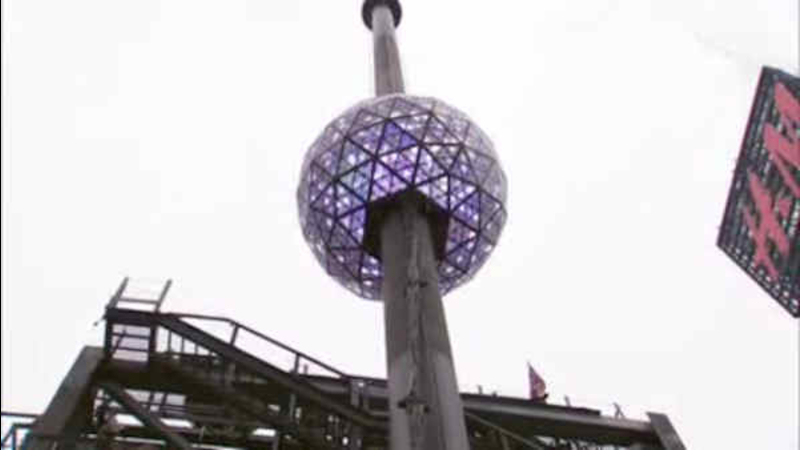 TIMES SQUARE, Manhattan (WABC) -- Just in time for New Year's Eve, organizers of one of the world's largest celebrations ran a test run of the Times Square ball drop.

The nearly 12,000-pound crystal sphere was raised to the top of One Times Square some 36 hours before it officially rings in 2016.

The ball will officially begin its one-minute descent down the 130-foot pole at 11:59 p.m. Thursday.

The ball drop tradition began on New Year's Eve all the way back in 1907, and seven versions of the ball have been designed to signal the New Year.

--The ball is covered with a total of 2,688 Waterford Crystal triangles that vary in size, and range in length from 4 3/4 inches to 5 3/4 inches per side.

--For Times Square 2016, 288 of the Waterford triangles introduce the new Gift of Wonder design composed by a faceted starburst inspiring our sense of wonder that nourishes the seeds of knowledge and achievement. Last year's Gift of Fortitude design utilized diamond cuts on either side of a crystal pillar to represent the inner attributes of resolve, courage and spirit necessary to triumph over adversity. The remaining 2,112 crystal triangles feature the Gift of Imagination design with a series of intricate wedge cuts that are mirrored reflections of each other inspiring our imagination.

--The 2,688 Waterford Crystal triangles are bolted to 672 LED modules which are attached to the aluminum frame of the Ball.

--The ball is capable of displaying a palette of more than 16 million vibrant colors and billions of patterns that create a spectacular kaleidoscope effect atop One Times Square.