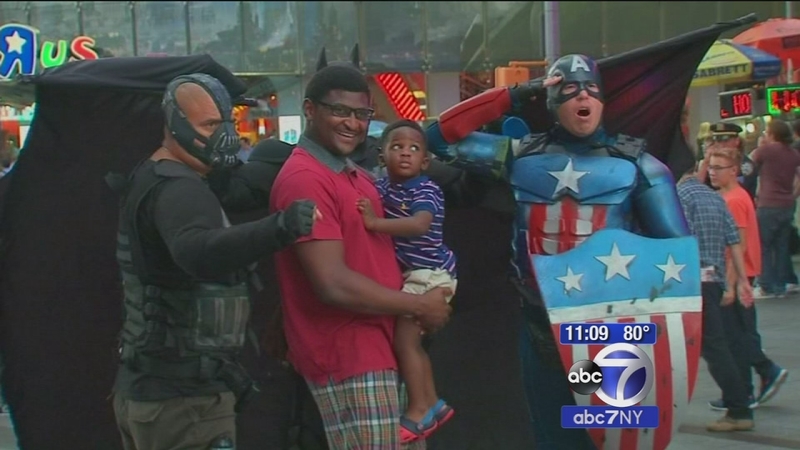 City task force to deal with problems in Times Square

TIMES SQUARE (WABC) -- Mayor Bill de Blasio says a multiagency city task force will be convened to address what he calls the "growing problem" of topless individuals and costumed characters in New York's Times Square, and one idea under consideration is eliminating the pedestrian plaza where they gather.

The ranks of nearly nude women at the Crossroads of the World have been growing, with many wearing only body paint and a thong while charging a few dollars to pose for photos with tourists.

"Millions of families and visitors come to Times Square every year to see and experience the bustling metropolis of New York City," de Blasio said. "Yet that experience has been diminished by the proliferation of topless individuals and costumed characters who too often harass people and expose families to inappropriate acts."

De Blasio says Thursday that Police Commissioner William Bratton and city lawmakers will study the legal issues associated with regulation and report back their findings by Oct. 1.

"To ensure all are welcome, and to continue the great success that is Times Square, the city will aggressively pursue every avenue for regulating these behaviors," de Blasio said. "This task force will identify the best legal and regulatory ways to move forward and keep Times Square the popular destination site for visitors and families from New York City and across the world."

The pedestrian plaza in Times Square and others across Manhattan were created under Mayor Michael Bloomberg.

"I am unhappy with some of what's happening in Times Square related to the costumed characters and painted women and I said very clearly I don't like it, I don't think it helps the environment there," said de Blasio.

From a law enforcement perspective, the easiest thing to do would be to get rid of the plaza and put Broadway back where it was historically, an idea Bratton has discussed with the mayor, who acknowledges that is still an option.

"You could argue that those plazas have had a very positive impact," said the mayor. "You could also argue they've come with a lot of problems and a lot of the surrounding business community has certainly cited those problems. So we'll give that a fresh look, I think that's consistent with the mandate of this task force."

The task force is grappling with ways to make Times Square comfortable for families and tourists, but also uphold the Constitution, something Mayor Giuliani went through in the 1990's. "I've never been accused of sounding like Rudy," said de Blasio.

While awaiting the task force report in October, the city will use existing laws to clean up the area to try to make it more family-friendly.