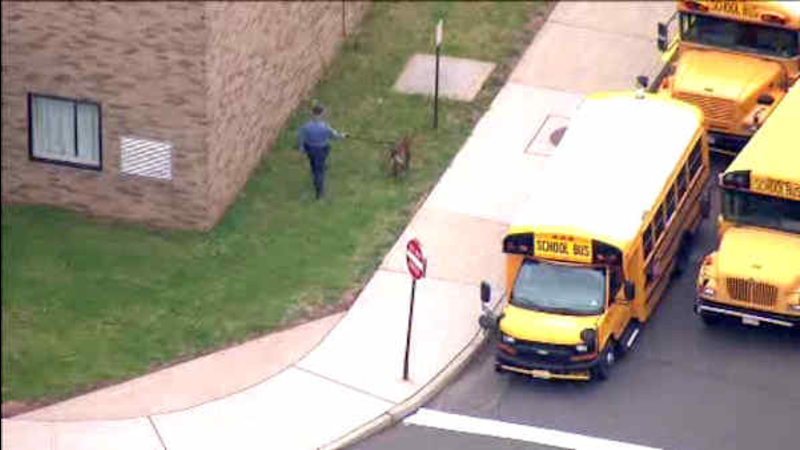 HILLSBOROUGH, New Jersey (WABC) -- A pair of trespassers prompted a lockdown and early dismissal at a school in New Jersey Friday.

The incident happened at Hillsborough High School and left students, administrators and law enforcement wondering how the two people got on campus.

Students say it's easy to walk inside before classes begin, which is what appears happened when the two strangers entered the building. And no one noticed until they started acting obnoxious.

Students were sent home early as authorities swept through the school and traced the perimeter of the property looking for clues. NewsCopter 7 was overhead as the students were being led to buses and while police dogs searched the area.

According to students, the intruders got into the school by blending in with the students before the day began. And once inside, they began to act irrational. One student said he saw the intruders and realized they were acting in a strange manner -- playing soccer, harassing some of the girls and speaking with slurred speech.

The school was locked down once school officials realized there was a problem, but it appears the intruders got away. As a precaution, classes were cancelled at noon, and other school function have been postponed.

The principal sent the following letter to parents:

Earlier this morning, two trespassers entered Hillsborough High School with the morning influx of students. Shortly after that, they left without obvious incident. A staff member and a student immediately reported their presence to the school administration, who began to investigate and involved the Hillsborough Township Police Department. Working together to review the known information, it was determined that it was in the best interests of the students and staff to know exactly who they were and what these trespassers may have done while here. As a result, we placed the school into a modified lockdown and took the appropriate steps to ensure everyone's safety.

Working collaboratively with the police, who mustered the additional resources of New Jersey Detect and Render Safe (which includes the regional K-9 task force), we secured dogs to check the parking lots and building to make sure that nothing dangerous had been left behind. In order to do this, we needed to restrict movement inside and outside the building, which resulted in the decision for an early dismissal today. This dismissal occurred at noon, which is our normal halfday dismissal time.

Prior to dismissal, the K-9 units checked the parking lots and then, after dismissal, checked the building. Under the masterful command of their handlers, the dogs effectively searched and cleared the building, determining that there was no risk to Hillsborough High School as a result of these trespassers. The Hillsborough Township Police Department is continuing its investigation to determine the
identity and purpose of the trespassers.

On behalf of Hillsborough High School, I would like to extend my appreciation to the Hillsborough Township Police Department and the New Jersey Detect and Render Safe task force for their work in keeping our staff and students safe. I would also like to thank the students and staff in particular for their patience and cooperation in school as we investigated and addressed any concerns. It is upsetting and unsettling to see the police and K-9 units at your school, but everyone was helpful and contributed in large and small ways to a very fast resolution to this concern. Working together, there is nothing that we cannot accomplish, and the HHS Family, once again, rose to the occasion. I am sincerely grateful to and proud of everyone.