Trump Faces Increasing Resistance From Within His Own Party 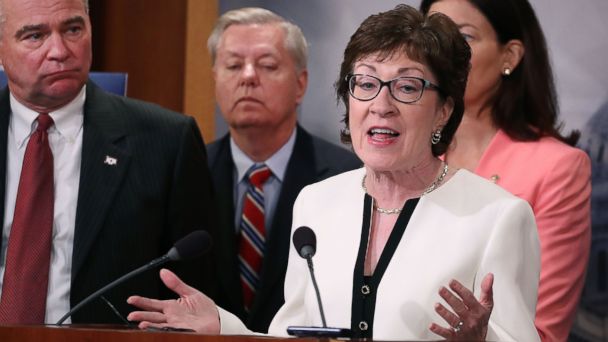 Sen. Susan Collins is just the latest Republican official to formally disavow Donald Trump as the list continues to grow.

The split between the Republican presidential nominee and the Republican Party has been present for some time and was on full display in Cleveland, where many notable members of the establishment skipped the convention.

Now with Collins' announcement and the actions of former Republican national security officials -- dozens of whom signed a letter released Monday saying Trump "would put at risk our country's national security and well-being" -- the gap is widening.

"We [have] 90 days left. He should be speaking to independents. He's still figuring out a way to patch the party together so that he has a uniform Republican Party in the course of this," ABC News political analyst Matthew Dowd said on "Good Morning America."

"That's a huge problem. As Hillary Clinton talks to independents, Donald Trump is still trying to figure out a way to keep Team GOP together," he added.

Collins is not the first Republican senator to say she won't be voting for Trump but she is the highest ranking of the bunch.

Collins was elected to the Senate in 1997 and is now the senior senator from Maine. She also served as the chairman of the Senate's Homeland Security Committee for four years.

Freshman Sen. Ben Sasse of Nebraska assumed office in 2015, while Sen. Mark Kirk is the junior senator from Illinois after being elected in 2010. Sen. Lindsey Graham, meanwhile, has served as the senior senator from South Carolina since 2005 after being elected to the Senate in 2003. All three men have said that they will not be voting for Trump, but Collins outranks them, adding an extra air of gravitas to her lack of endorsement.

"With the passage of time, I have become increasingly dismayed by his constant stream of cruel comments and his inability to admit error or apologize," Collins wrote in an op-ed for The Washington Post that was published Monday night.

She continued: "But it was his attacks directed at people who could not respond on an equal footing -- either because they do not share his power or stature or because professional responsibility precluded them from engaging at such a level -- that revealed Mr. Trump as unworthy of being our president."

While Collins, Sasse and Kirk have said outright that they will not be voting for Trump, there are other heavy-hitters who have notably withheld their endorsement.

Trump's former presidential rival Sen. Ted Cruz has been public with his lack of support, and was widely booed at the Republican National Convention when it became clear that he was not planning to endorse Trump.

Sens. Jeff Flake and Mike Lee have also been clear that they are withholding their endorsement.

"Donald Trump has left a lot of Republicans stranded with nowhere to go in the course of this race," Dowd said.

Out of Office but Not out of Sight

The list of former Republican officials who have returned to the public eye to denounce Trump is also growing.