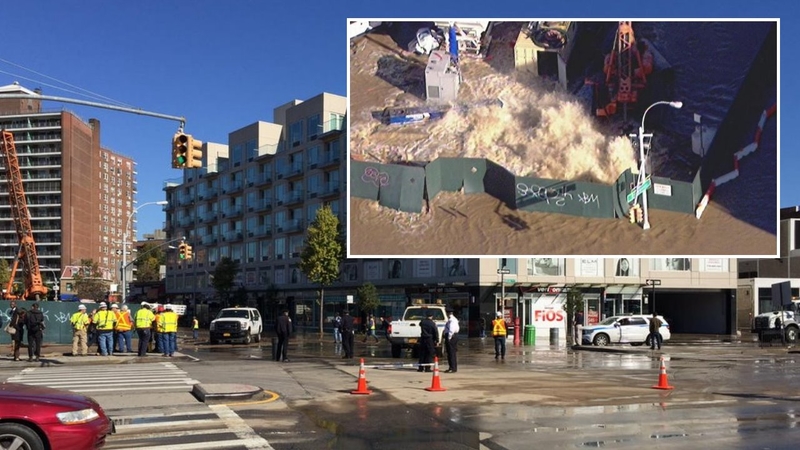 QUEENS, N.Y. (WABC) -- Workers have closed the valve on a massive water main break that spilled thousands of gallons of water into the streets in Elmhurst Friday morning, closing down a section of the city.

The water breached the site and flooded Queens Boulevard and Broadway, near the Queens Center Mall.

Construction crews had been operating at 51-35 Reeder Street in Queens when shoring pilings they were installing struck a water main. The work site quickly flooded but all workers were accounted for.

City Department of Environmental Protection workers worked to stem the water flow. They had a difficult time finding the exact valve to turn off because of the amount of water in the area. Just after 12 p.m., they succeeded in shutting off the main.

Video from NewsCopter 7 shows a massive water main break near the Queens Center Mall in Elmhurst.

The water level in the area got up quite high:

Look at how high the water level is next to the trash cans. Water main break on Queens Blvd. pic.twitter.com/JGqjT5UciH

Here were the road closures as a result of the break:
- Queens Boulevard at the Queens Center Mall (both directions) between 51st and 55th avenues
- Broadway from Corona Avenue to Seabury Street

There were also delays on the Long Island Expressway.

Only one building was partially evacuated, according to the fire chief, but several buildings in the area and along Broadway were impacted.

On subways, trains are able to run through the area. Drains are catching water that has entered the subway system, but E, F, M and R subway trains are running with delays in both directions.

Here's what it looked like at ground level when the break first happened: 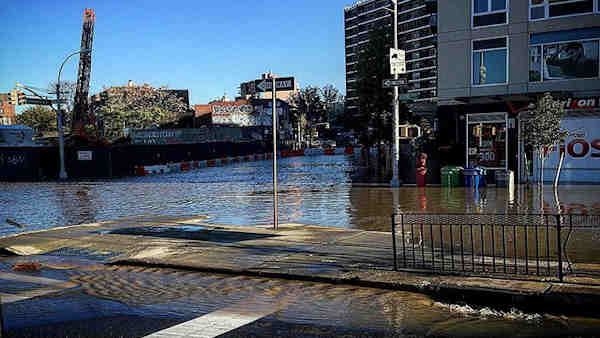