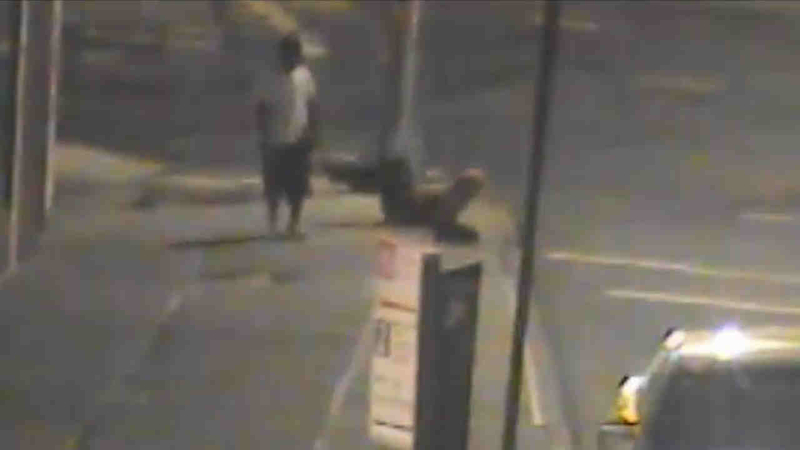 JAMAICA, Queens (WABC) -- There is new information in the case of a 64-year-old man who died after being punched in the head while walking on the street in Queens in June, and authorities are hoping newly released surveillance video will lead to the location of a man and a woman they are looking for in connection with the attack.

It appears Patrick Gorman was just standing there at Main Street and Queens Boulevard in Jamaica when a man punched him and knocked him to the ground around midnight on June 26. He tried to get up but fell back down as the suspect walked away and was joined by the woman, who handed him a bag.

Gorman was taken to Good Samaritan Hospital before being moved to Jamaica Hospital, where he later died.

"Pretty sad," one area resident said. "That's what happens. That's the world we live in."

Five months after the incident, police have released the surveillance video with the hopes that someone will recognize the pair. His death has been ruled a homicide.

Neighbors who live in the same building as the victim found the violent act to be disturbing.

"That's so sad," neighbor Esther Yeboah said. "This guy always goes to work and comes home. And all of a sudden, you just punch him, and now he dies. That's not good."

"He's a nice guy," said a neighbor, John Rynkowski, who says Patrick lived by himself and was a big baseball fan.

"He goes to every city," said Rynkowski. "You name the city and he would go to them all. Philly, Baltimore."

("He loved baseball that much? How about the Mets?", we asked.) "Of course, I see him all the time at work. I work at Citi Field," said Rynkowski.

One witness reportedly told detectives the victim pushed the woman first, prompting the man to punched him in the face. It is unclear if the punch led directly to Gorman's death, as authorities say Gorman had a stroke, several heart attacks and a history of preexisting medical conditions.

The man is described as black, in his early to mid 30s, with short black hair. He was last seen wearing a white T-shirt, black shorts, sneakers and holding a black bag.

Images of the two from the NYPD:

Police are looking for a man and a woman wanted in a punching attack in Queens.