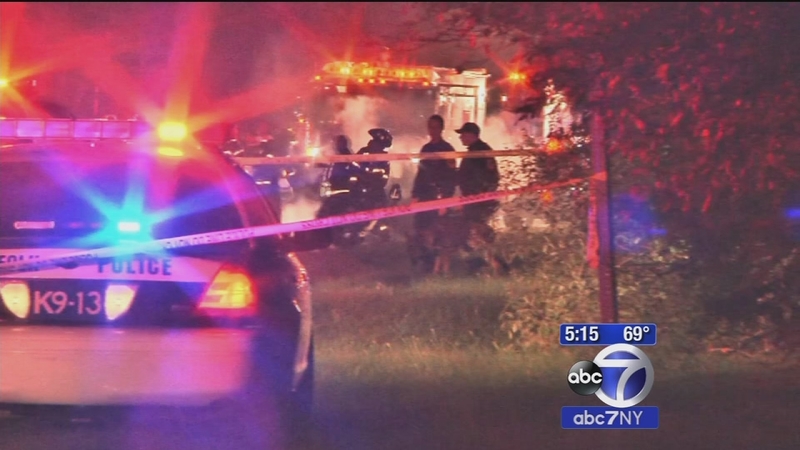 DIX HILLS, N.Y. -- Police on Long Island say a woman being chased by officers after fleeing a traffic stop drove the wrong-way on a parkway, smashing head-on into an oncoming vehicle early Tuesday.

Both the woman and the driver of the other vehicle were killed in the accident, which happened on the eastbound Northern State Parkway in Dix Hills just before 3 a.m.

Suffolk County police say the woman was initially stopped in the Central Islip area on suspicion of DWI and driving a stolen vehicle. She refused to comply with officers' commands, got back in the car and drove away. Police say she nearly hit an officer while fleeing.

"The suspect refused to comply," Suffolk police Detective Lt. Darrel Simmons said. "She got into the driver's seat of that vehicle and fled the scene...The police officer then engaged in a police pursuit with that suspect."

Authorities say she then drove the car westbound in the eastbound lanes, striking a 2011 Honda Accord between exits 41 and 42.

The vehicle that had been going to the wrong way burst into flames, and both drivers were pronounced dead at the scene. The driver of the wrong-way vehicle was taken to the Medical Examiner's Office for identification. A burned out shell of an SUV and a wrecked sedan could be seen at the crash site.

Police did not specify the exact path of the chase or how long the vehicle was going the wrong direction on the parkway. The highway was closed for about seven hours after the crash.

Suffolk County police say their pursuit guidelines state, "Officers shall not pursue a suspect the wrong way on an interstate or other controlled access highways or divided roadways, unless specifically authorized by the field supervisor." There was a supervisor on duty, but police are still investigating whether that supervisor was notified about the pursuit.