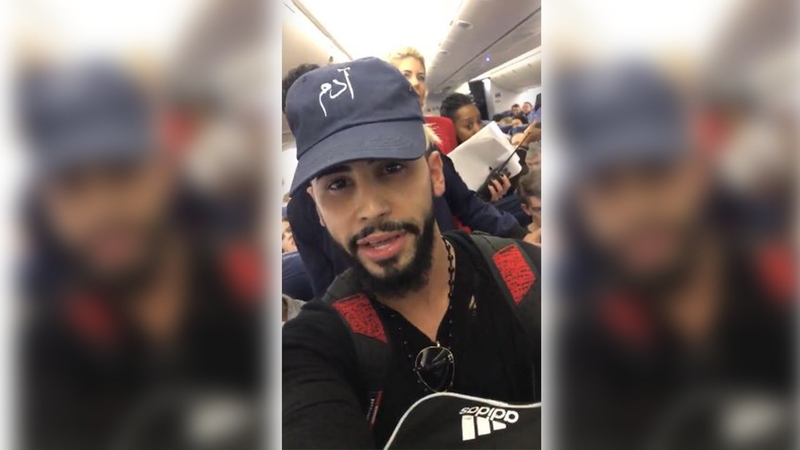 LONDON (WABC) -- Popular YouTuber Adam Saleh, known for his pranks, claims he was removed from a Delta flight in Heathrow Airport in London because he spoke Arabic and passengers complained, but according to the airline and passengers, the incident may have been a provocation.

Saleh sparked a tweet-storm on Wednesday morning after posting video of himself and a friend, 22 year old Slim Albaher of Brooklyn, being removed from Delta Flight 1. In the tweet, Saleh claimed that people complained to flight attendants because he was speaking Arabic while on the phone with his mother.

We got kicked out of a @Delta airplane because I spoke Arabic to my mom on the phone and with my friend slim... WTFFFFFFFF please spread pic.twitter.com/P5dQCE0qos

The flight was delayed 53 minutes while authorities responded to the incident.

Flight 1 arrived in New York City around 3:00 p.m. on Thursday. After the plane landed, Delta said the crew was debriefed and statements were collected from some passengers about the incident.

In a written statement, the airline said, "It appears the customers who were removed sought to disrupt the cabin with provocative behavior, including shouting. This type of conduct is not welcome on any Delta flight. While one, according to media reports, is a known prankster who was video recorded and encouraged by his traveling companion, what is paramount to Delta is the safety and comfort of our passengers and employees. It is clear these individuals sought to violate that priority."

Eyewitness News talked to three passengers, one of whom witnessed the initial confrontation. That witness suggested it does appear that Saleh made a deliberate attempt to provoke a confrontation.

The woman, who asked us not to use her name, says the incident began when Saleh thrust his fist in the air and began speaking in a language some described as Arabic. She said he did this at least three times, touching off a confrontation between Saleh and a woman with a baby, who said she was not comfortable. Others backed her up and demanded Saleh be ejected from their flight.

Another passenger admitted he did not witness the initial confrontation, but what he heard from others who did see it seems to support our direct witness's version of events. A third passenger, an ordained minister from Ohio, said that if it was a deliberate provocation or prank she would be very angry.

Saleh found himself in the middle of a controversy that some thought was wholly contrived for his 250,000 Internet followers.

"This was not a prank, no prank at all," said Saleh Wednesday night. But for all his sudden anger, even he acknowledges he was laughing at the time.

"While we're in there getting accused and people telling us to leave right now, me and him felt like we were terrorists, we're looking at each other laughing," he said.

Saleh's initial tweet and those that followed led to a trending #BoycottDelta hashtag, but many including Delta were also quick to point out that Saleh is also a known prankster and someone who has pulled hoaxed on airlines.

Earlier this month, Saleh claimed in a video to have smuggled himself on a plane in a suitcase.

NEW VIDEO IS UP!!
I Smuggled Myself On A Plane To Another City and IT WORKED!! (IN A SUITCASE)https://t.co/qkNzQR7eXW

After that incident, Tigerair Australia responded with a tweet of its own, pointing out the airline had video of Saleh boarding the plane.

Back in February, Saleh also produced a video in which he counted down in Arabic on a plane in what he termed an experiment.

After Wednesday's incident, Metropolitan Police questioned the two men, but released them after determining that they did not do anything illegal.

Eyewitness News has learned, based on their conversations with Metropolitan Police, it appears that Saleh first claimed to be talking to his mother on the phone in Arabic and then to Albaher in Arabic. During an ensuing back in forth with a woman seated in front of them, Saleh asked her if she had ever heard another language. The verbal dispute continued with her and with another man. After it escalated, the captain came back and asked that the two men leave the plane, which they did.

In an earlier statement, Saleh explained: "I was speaking to my mom on the phone like I always do before getting on a flight. I call her before I take off and when I land so that she knows I am safe and well. I was speaking in Arabic when a female passenger began shouting that they felt uncomfortable. This encouraged almost 10 other passengers to agree and shout the same thing. We were kicked off the flight while those passengers mocked us."

Saleh and his friend booked with Virgin airlines to return to New York City. He also tweeted that he would be "heading to our lawyer" once they landed.

Thank you all so much for your support!! I appreciate every single one of you!!! Will talk when I land! Love xx