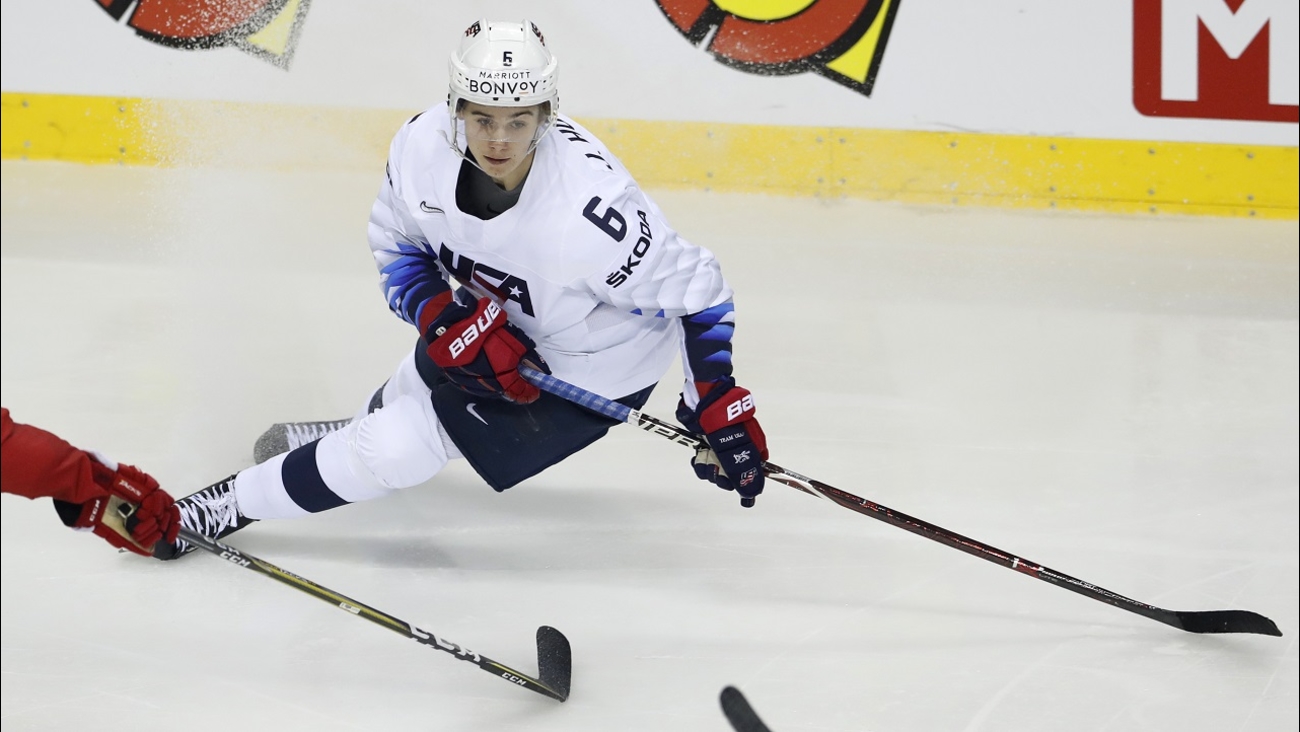 From Orlando, Florida, Hughes is the eighth American selected No. 1, and first since 2016, when the Toronto Maple Leafs chose Auston Matthews.

The 5-foot-10, 170-pound play-making center was the NHL Central Scouting Bureau's top-ranked North American prospect. Hughes was chosen ahead of Finland's Kaapo Kakko, who was the top-ranked European prospect.

Hughes had 74 goals and 154 assists to set the USA Hockey National Team Development Program's two-year record with 228 points in 110 games.

The Rangers followed by selecting Kakko. He's a 6-foot-2 winger, who helped Finland complete an international gold-medal sweep at the world championships, world juniors and Under-18 tournament. He had 22 goals the Finnish Elite League, the most by a draft-eligible player.

The Chicago Blackhawks picked next after jumping from third from 12th in the order after being one of the teams to win the draft lottery.

Hughes comes from a hockey family. His father, Jim Hughes coached at the professional level, and also served also served as the Toronto Maple Leafs' director of player development. Jack Hughes credits the time he spent playing minor hockey in Toronto as helping spur his development.

A year ago, Hughes attended the NHL draft to watch his older brother, defenseman Quinn Hughes, be selected with the seventh pick by the Vancouver Canucks.

Canucks general manager Jim Benning cracked a joke this week when asked if Quinn Hughes lobbied to have Vancouver attempt trading up from the 10th pick to first and draft his brother. "Yeah, I had conversations but they didn't last long," Benning said. "He's a great player. I don't expect him to be there at 10."

This marked the second time the Devils have selected first. In 2017, New Jersey chose Switzerland's Nico Hischier, who helped the Devils reach the playoffs in his rookie season. Injuries contributed to New Jersey taking a step back last season in which they finished 29th in the overall standings.

The Devils jumped up three spots in the draft order by winning the lottery in April.

With Hughes expected to make an immediate jump to the NHL next season, he has the potential of providing the Devils an even stronger presence up the middle, joining Hischier and Taylor Hall, the league's 2018 MVP.

Hughes' selection was expected to open what should be a banner first-round for USA Hockey's development team and American-born players overall.

The scouting bureau ranks NTDP centers Alex Turcotte and Trevor Zegras fourth and sixth. Though under-sized at 5-foot-7 and 162 pounds, winger Cole Caufield is ranked eight after scoring a NDTP record 72 goals this season. And the list of potential first-round selections are rounded out by left winger Matthew Boldy, defenseman Cameron York and Spencer Knight, the top-ranked North American goalie. And that doesn't include a handful of Americans playing in high school or in the Canadian junior leagues.

The 2016 draft set the record with 12 Americans selected in the first round.

NHL Commissioner Gary Bettman opened the draft and was greeted by a traditional round of loud boos from the sold-out arena. Bettman then left the podium and waited for former Canucks stars Henrik and Daniel Sedin to join him on stage, where they were greeted to loud cheers.

The Sedin twins were selected second and third overall in the 1999 draft. Bettman then announced both players' jerseys - Daniel wore No. 22 and Henrik, 33 - will be retired this season.