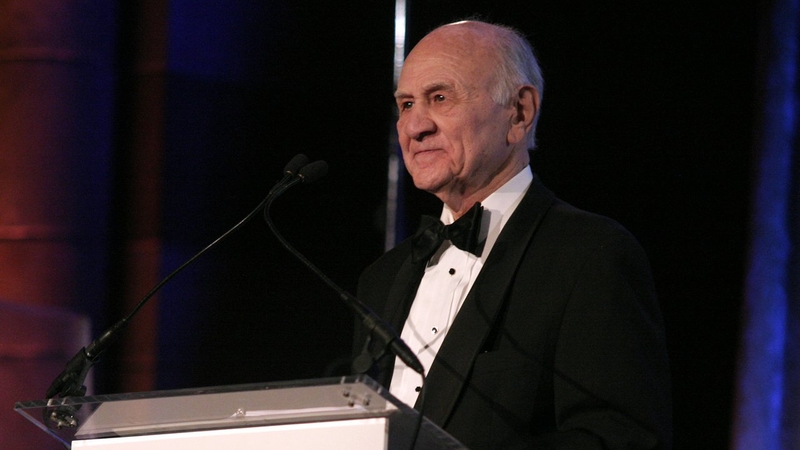 Scoppetta was named fire commissioner after 9/11, under then-Mayor Michael Bloomberg. He held the title for eight years, from 2002 to 2010. Before that, he ran the Administration for Children's Services during the administration of Rudolph Giuliani.

Mayor Bill de Blasio said Scoppetta was a caring public servant who led "the FDNY through it darkest days" after the Sept. 11 terrorist attacks. Scoppetta also served as deputy mayor and commissioner of investigation.

Scoppetta was born in 1932 to Italian immigrants on the Lower East Side.

"We are saddened at the passing of our beloved father after a long illness that he fought so bravely. He was our dad and, along with our mom, Susan, the very center of our family. Yet, he also shared so much of himself with many people he worked with during a half century of public service - and we know this is a loss for them as well. We're so proud of our father and his accomplishments, in law enforcement, his work protecting the city's vulnerable children, and his devotion to rebuilding the devastated FDNY after 9/11. His contributions are immeasurable. To all of his endeavors he gave himself fully, with a devotion and passion commensurate with the love and support he had as a husband, father and grandfather. We miss him - and we always will.

Photos: Nicholas Scoppetta through the years

"We are deeply saddened to learn of the passing of Nicholas Scoppetta. Nick was a dedicated and brilliant civil servant whose commitment to public service spanned five administrations and six decades. As the founding Commissioner of the Administration for Children's Services, Nick cared deeply for the safety and well-being of our city's foster children. New Yorkers will be forever grateful for his leadership as Fire Commissioner following 9/11, when he led the FDNY through its darkest days. A born and bred New Yorker, Nick's path from his youngest days as a foster child to his distinguished career across city government is an inspiration to all of us. New York City is better today because of Nick Scoppetta, and our heart goes out to his family and friends." -- Mayor Bill de Blasio
---
"As Fire Commissioner, Nicholas Scoppetta was instrumental to rebuilding the FDNY during a time of unimaginable loss and devastation. The Department is stronger today thanks to his leadership in the years following September 11th. He was truly a public servant without peer, and we deeply mourn his loss." -- FDNY Commissioner Daniel Nigro
---
"Nicholas Scoppetta had a long career of service to New York City, including eight years as the commissioner of FDNY. I was very saddened to hear of his passing and his friends and family are in my thoughts at this time." -- City Council Speaker Melissa Mark-Viverito
---
"Today we lost an extraordinary New Yorker, Nick Scoppetta. Over five decades of service to our city, Nick never hesitated to answer the call of duty - and almost every mayor going back a half century called on him, usually to help the city through a crisis. When I asked Nick to serve as Fire Commissioner, it was just months after the attacks of 9/11 and the department was devastated by the loss of so many of its own. Nick did an extraordinary job guiding the department through that painful time, rebuilding it, and leading it to new heights. Under his leadership, New York City was safer from fires than ever before in its history. At every turn in his career, Nick succeeded in making our city a better place, and he set a wonderful example for others. He was as capable as he was honorable, and he won admirers everywhere he went. All of us will miss him." -- Former Mayor Michael Bloomberg
---
"He had a 100 percent approval rating of everyone in government who served with him. He was an exceptional public servant. I don't think there was anyone who has done as many important jobs in New York City that were so different so well. The reason you are hearing good things about him is, not only are people impressed with how many good things he did so well, but he was an honest and good man. He was a man of his word, a man you could trust, a man you liked being with. Except many for some of the criminals he put in jail, I never heard anyone say a bad word about him...(after 9/11) I thought it was an ingenious choice by Mike Bloomberg to pick him. The Fire Department needed a guy with empathy, understood psychology, much more than a guy who could fight fires. They got 11,000 people who can fight fires." -- Former Mayor Rudy Giuliani
---
Copyright © 2022 WABC-TV. All Rights Reserved.
TOP STORIES
Miki Sudo claims victory in Nathan's Hot Dog Eating Contest
NYPD increases officers, security ahead of NYC 4th of July fireworks
2 Long Island beaches expected to reopen after lifeguard bit by shark
Teen arrested in Newark drive-by shooting that injured 9
Child found dead in Wallkill pool, adult in critical condition nearby
AccuWeather: Sunny and warm for your 4th of July
Macy's 4th of July Fireworks 2022: Everything to know
Show More
Where to watch 2022 Fourth of July fireworks
Correction officer released from hospital after 3 shot in Queens
Consecration held for church destroyed in September 11 attacks
Travel trouble with flights, gas prices continues this 4th of July
Bicyclist killed in hit and run; driver fled in another car with baby
More TOP STORIES News