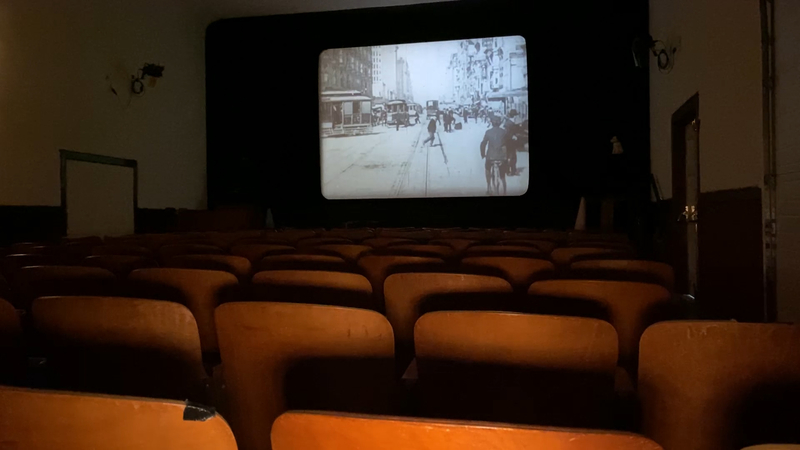 FREMONT, Calif. -- The Historic District of Niles in Fremont, Calif. is a living piece of history in the Bay Area.

The district houses many original buildings built more than 100 years ago.

Among those buildings is the Niles Essanay Silent Film Museum, which hosted some of the biggest names in silent film history and continues to share their stories.

As we continue to highlight Fremont, we have to check into the Historic Niles District. It was here that silent filmmaking found its way to the Bay Area. The Niles Essanay Silent Film Museum shares the history still today! pic.twitter.com/LkHSNbaWE1

"Our museum is a unique combination of a silent era movie theater in a historic town that had a movie company from 1912 to 1916," Niles Essanay Silent Film Museum Historian David Kiehn said. "They made over 350 films. It's where Charlie Chaplin made 'The Tramp' and where the Essanay people, who were part of that movie company, came to this theater to watch movies. So, Charlie Chaplin sat in this theater."

Since 2005, the museum has shown silent films every Saturday night, in as close to original condition as possible, for guests looking to relive the golden age of film.

Many of the movies shown, including those by the Essanay Film company and Charlie Chaplin, were even shot and originally shown in the Niles District Fremont, Calif.

Recognize this guy? Yes, the great Charlie Chaplin spent several months in Niles where he even shot his iconic film, “The Tramp”! pic.twitter.com/DGBEp1lwyq

The Saturday night showings are just a small part of what this museum has to offer to guests visiting.

In addition to their Charlie Chaplin film festival, featuring a look-a-like contest and the "Broncho Billy" festival that they do yearly, there are plenty of pieces of history on display every weekend in Fremont.

"We have a research library with some pretty rare books in it. We've got posters, photographs on display. We've got silent era movie equipment and we've actually used some of the equipment to make our own silent films for special occasions. We have a film collection of over 10,000 prints. We use the original projection booth to show silent films every Saturday night with live piano music. It's just a unique place to see what silent films were all about."

Here’s maybe the coolest part of the Essanay Silent Film Museum: every weekend, the museum plays original silent film prints of thousands of movies, many of which were filmed in Niles! Charlie Chaplin even sat in the same theater to watch his own films debut. Talk about historic! pic.twitter.com/P5fc0FrKa1

While the East Coast and Hollywood were the two most prominent locations that films were shot, the Bay Area, and Niles in particular, was very important to the history of silent film.

More than 100 years ago the Essanay Film company came to the city and it's why the museum continues to dawn their prominently today.

"The Essanay Film Company that came here in 1912 was headed by 'Broncho Billy' Anderson (Gilbert M. Anderson), who was the first movie star cowboy in silent films. Niles was just a small railroad and farming community, but the thing that they had going for it for movie making was Niles Canyon. 'Bronco Billy' Anderson was very interested in San Francisco. He loved that city. But, Niles was the place, finally, that he recognized as the place he wanted to be and they made over 350 films."

The museum houses so much history of silent film, including an actual Oscar of “Broncho Billy” Anderson who was the head of the Essanay Film Company. You can pose with it for pictures when it’s at the museum from time to time. And yes, this thing is heavier than it looks! pic.twitter.com/4A4eQT1oWH

350 films that were first of its kind and are iconic still today.

Silent films were the beginning of cinema that we know today and the Essanay Silent Film Museum hopes to continue to shine a light on this important piece of history to film and the city.

"I think the important thing is to remember what happened here, which is why we formed the museum in the first place. Silent films are their own entertainment medium. You've got an audience watching a screen that has no dialogue, you're getting your information from the images and you've got a live piano player or other kind of musician playing for them. So you get an interaction between the film, the audience and the music. I think the experiences pretty close to the original experience. It's a pretty satisfying thing to be here and preserve the history and see people discovering that for themselves. Plus, we're showing films that were shown in this theater 100 or more years ago. You really can't find that anywhere else."

RELATED: Hike to the top of the jewel of Fremont: Mission Peak

The museum is open on Saturday and Sunday throughout the year.

For more information, visit the museum's website by clicking here.

Niles is a piece of history and the Essanay Silent Film Museum is a perfect example of that! Check out the museum when they are open on Saturdays and Sundays! pic.twitter.com/xnkWYC1kUC