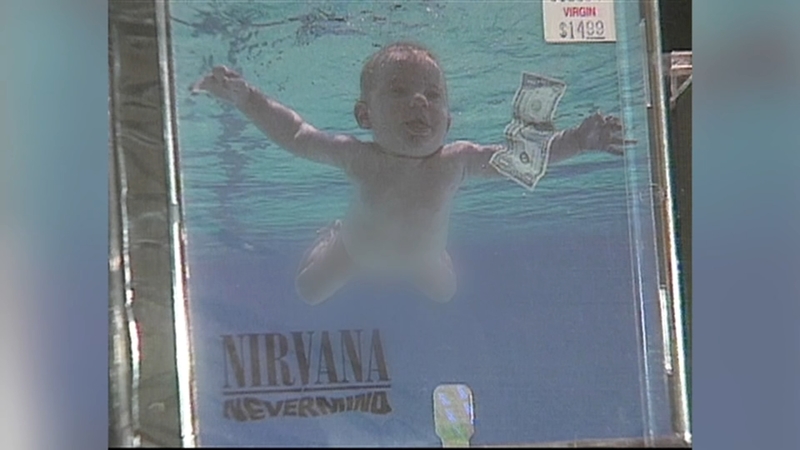 LOS ANGELES -- A federal judge has dismissed the lawsuit of a 30-year-old man who alleged that the image of him nude as a 4-month-old on the 1991 cover of Nirvana's "Nevermind" album is child pornography.

Judge Fernando M. Olguin on Monday granted a motion to dismiss the suit from the defendants, who include surviving Nirvana members Dave Grohl and Krist Novoselic and the estate of Kurt Cobain, but left the door open for plaintiff Spencer Elden to refile an amended version.

The dismissal came after Elden's attorneys did not file an opposition to the defendants' motion to dismiss by a Dec. 30 deadline. The attorneys declined comment Tuesday.

The lawsuit, filed in August in federal court in California, said that Elden had suffered "lifelong damages" as the band and others profited from the ubiquitous image of him naked underwater appearing to swim after a dollar bill on a fish hook.

The motion to dismiss filed Dec. 22 by Nirvana's attorneys argues that the suit was filed well past the 10-year statute of limitations of one of the laws used as a cause of action, and that another law it cites wasn't enacted until 2003 and was not retroactive.

The motion says the lawsuit is "on its face, not serious," and Elden's conduct reflects that.
"Elden has spent three decades profiting from his celebrity as the self-anointed 'Nirvana Baby,'" the document says. "He has reenacted the photograph in exchange for a fee, many times; he has had the album title 'Nevermind' tattooed across his chest; he has appeared on a talk show wearing a self parodying, nude-colored onesie; he has autographed copies of the album cover for sale on eBay; and he has used the connection to try to pick up women."

The judge gave Elden's attorneys until Jan. 27 to file an amended complaint that addresses the issues raised in the defendants' motion, or the suit will be more definitively dismissed.


One of Elden's attorney's, Maggie Mabie, told The Associated Press in August that he filed the lawsuit when he did because he "finally has the courage to hold these actors accountable."

Mabie said despite the photo being 30 years old, the lawsuit was within the statute of limitations of federal child pornography law for several reasons, including the fact that the image is still in circulation and earning money.

The suit sought at least $150,000 from each of more than a dozen defendants, including the record labels involved in the release and re-release of "Nevermind," and cover photographer Kirk Weddle.
Elden's father was a friend of Weddle, who took pictures of several swimming babies in several scenarios at the Rose Bowl Aquatic Center in Pasadena, California.

When the photo was shot, Nirvana was a little-known band with no sense they were making a generation-defining album in "Nevermind," their first major label release, whose songs included "Smells Like Teen Spirit," "Come as You Are" and "Lithium." Cobain died in 1994.