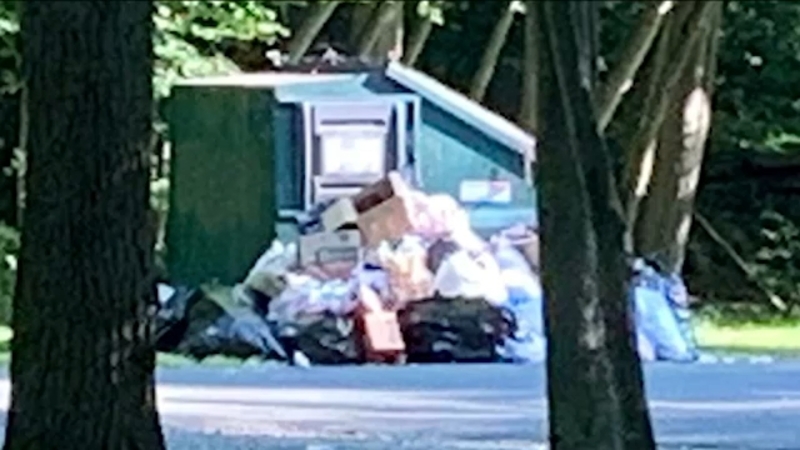 RANDOLPH, New Jersey (WABC) -- Visitors to a park in New Jersey were met with large 'closed' signs and barricades blocking the entrance Friday after someone trashed the outdoor recreation area.

Park Commission Executive Director David Helmer said he had little choice, but to close Hedden Park in Randolph, in Morris County after visitors recently left the park piled with large bags of trash.

"A resident was walking along a trail and saw somebody making a fire and let them know this was not permitted and called our park police," Park Commission Executive Director David Helmer said.

Someone had dammed up Jackson Brook with large rocks to create a swimming area.

Some made their own campfires in non-designated areas and left two public restrooms in deplorable conditions.

At 420 acres, Hedden Park is one of the smaller 28 open sites in the park system, but officials say they are clearly seeing much larger numbers of people here in recent weeks.

"We are seeing our visitation somewhere between 46% over last May to as much as 300% on some of our trails and we are not seeing the same type of activity. I'll call this an anomaly," Helmer said.

The fires are especially concerning when built not in picnic areas and when precautions are not taken.

"We believe one group placed their charcoal embers into one of our large trash dumpsters. The local fire department had to come out and put a fire out," Helmer said.

Local residents who frequently come to the parkhope it reopens soon.

"I think it's absurd. It's such a beautiful place that serves the public and was closed because of the misdeeds of an individual or a few individuals," park user Michael McCaffrey said.

"Once that volume of visitation gets so high we've had to clamp down significantly," Helmer said.