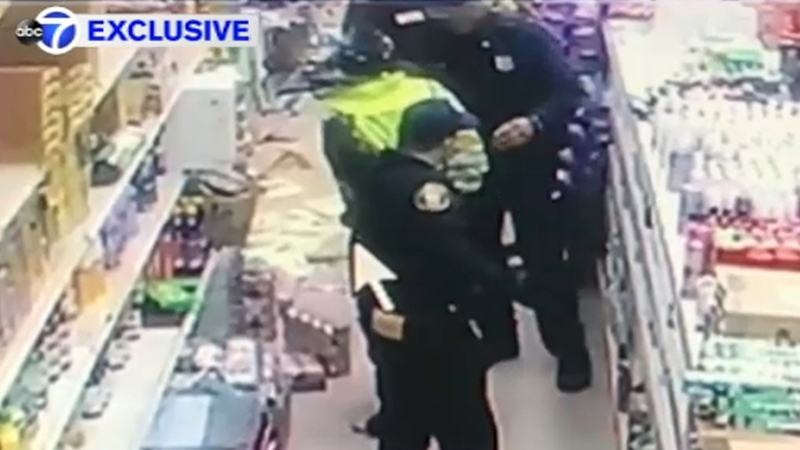 HOBOKEN, New Jersey (WABC) -- Police say a burglar is in custody after a wild crime spree in Hoboken Wednesday that had a number of twists and turns along the way.

It all started when authorities say the man, wearing a construction jacket, broke into a pizzeria through the roof. He tried to break an ATM to steal cash but was unsuccessful, then went into the back and took two dozen bottles of Snapple.

The suspect tried using a fire extinguisher to break out through the front door, only to find the rolldown gate closed, so he was trapped.

He climbed back up, crawled through a common attic and dropped into the nail salon next door, then proceeded to steal some money from the salon.

Upon realizing he was trapped in that location, he climbed back up into the crawl space and went into the liquor store next to the nail salon, according to investigators.

After stealing liquor from the store, he broke a 6-foot hole and went into a dollar store, where he was unable to escape.

In the end, police say he drank the liquor and fell asleep on a shelf. The dollar store proprietor found him at about 10 a.m. and called police.

Exclusive video from NewsCopter 7 showed police on the roof, taking measurements as they investigated the case.

There was $10,000 in damage in the pizzeria alone, from the dining area to the back of the kitchen. The money taken from the registers exceeded $2,000, police said.