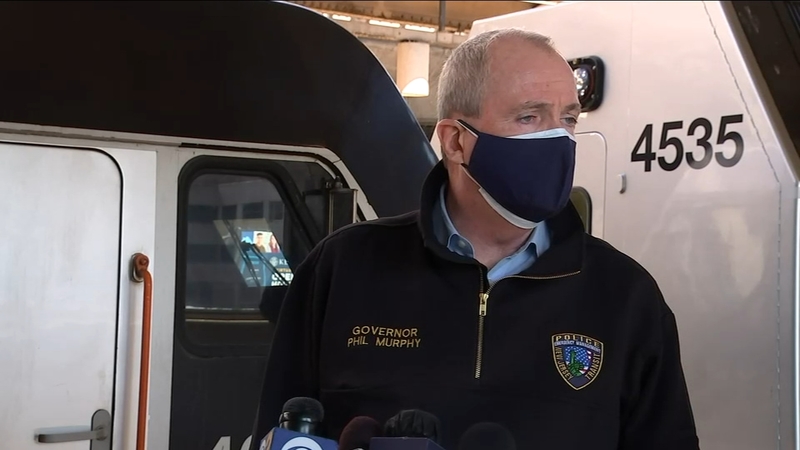 NEW JERSEY (WABC) -- Governor Phil Murphy and NJ Transit officials Tuesday marked the beginning of testing of the first of 25 new ALP-45 dual-power locomotives manufactured by Alstom during a ceremony that was held on Track A at Newark Penn Station.

"Since day one, our administration has been committed to building a better, more reliable, and sustainable NJ TRANSIT," Governor Murphy said. "This locomotive is the first of 25 that will reinvigorate the NJ TRANSIT fleet with new, environmentally-friendly equipment. New Jersey commuters deserve only the best, and that is what we are delivering to them today."

NJ Transit says they already have one new dual-power locomotive, but more are arriving this year through early next year, and eight more are on order.

"In just two years, we begin taking delivery of 113 new self-propelled multilevel rail cars to replace the 40-year-old plus Arrow III cars, and all of these new locomotives and rail cars promise to significantly improve service and reliability for our customers," NJ TRANSIT President & CEO Kevin Corbett said.

The ALP-45s offer a significant increase in horsepower, acceleration and available head-end power. The ALP-45 locomotives are designed to operate push-pull passenger train service on both electrified and non-electrified lines at speeds of up to 125 mph in electric mode and up to 100 mph in diesel mode.

The locomotives will undergo dynamic qualification and acceptance testing for about six weeks, at which time they will be prepared to enter revenue service.