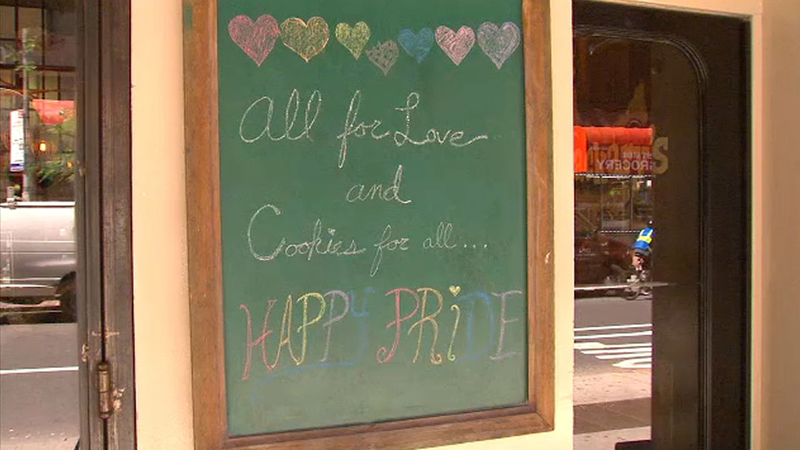 NEW YORK (WABC) -- A New York man is on a mission to shine a light on businesses that are welcoming and inclusive to all.

At Schmackary's in Hell's Kitchen, there are plenty of sweet cookies and a sense of inclusion -- the bakery celebrates gay pride and all people for that matter -- which is why the owner will be placing a NOLO sticker in his window.

"In 2018 our country is so divided in so many different ways and I find that so sad, we've come so far and we've got such a long way to go so to be a place where anyone can come and be served without fear just seems like a no-brainer for me," said Zachary Schmalhl of Schmackary's.

NOLO stands for No One Left Out and is the brainchild of Jonathan Ledee. He launched the NOLO project last weekend after a friend who identifies as female was denied entry to a rooftop party for gay men in late May.

"I was so angry, my initial reaction was to point fingers or send off a tweet or do something that would get them in trouble, but I grew up learning the power of peacefully seeking change," Ledee said.

That is why he is asking businesses to sign a declaration and agree to be a safe place that is welcoming and inclusive to all.

The project may have launched in NYC, but so far 62 businesses have signed on in 23 cities and eight countries -- all within 48 hours.

It is free to participate in the project and Ledee even put a rush on printing the stickers for businesses to put in their windows after experiencing such quick demand.