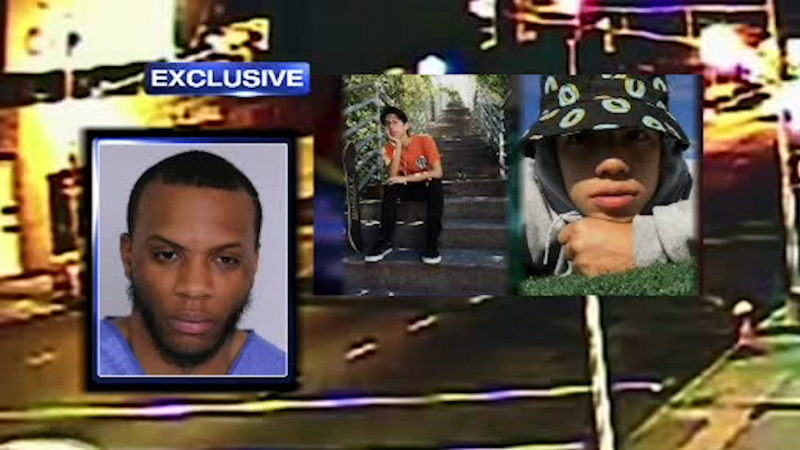 NORTH BERGEN, New Jersey (WABC) -- Calling it one of the worst crash scenes they've ever witnessed, authorities have arrested a suspect in the weekend accident that killed two teens in North Bergen.

The driver, identified as 23-year-old Eric Patterson, is charged with two counts of death by auto and one count of assault by auto. Patterson was also charged with speeding, reckless driving and driving with a suspended license.

The accident occurred around 9:15 p.m. Saturday in the area of 26th Street and Kennedy Boulevard near Union City High School in North Bergen.

"The car neared 26th street and swerved to avoid cars stopped at the red light. It crossed over the southbound lanes and mounted the sidewalk, striking three teenagers." Hudson County Sheriff Frank Schillari said. "The car then drove into the bench, went airborne and crashed against the wall."

City officials say the driver was traveling in excess of 70 mph in a 25 mph zone.

"The devastation that we witnessed first-hand, without a doubt, the worst accident scene that I've seen in my entire career," North Bergen Police Chief Robert Dowd said.

"I've been in law enforcement almost 29 years, and what I witnessed on Saturday night I'm sure will forever stay in my memory," Union City Mayor Brian Stack said.

17-year-old Bryan Rodriguez and 16-year-old Noel Herrera, childhood friends, were struck and killed. A third teen, Manny Sanchez, is still in the hospital after suffering a broken leg.

"This is a very sad and difficult time for the School District and the entire community of Union City. Bryan Rodriguez was a very popular and well-liked young man who played on the freshman football team and who loved to dance. Our hearts go out to the families of all three children involved." says Superintendent of School Silvia Abbato.

A full team of grief counselors were at the high school on Monday.

A prayer vigil was held at the accident scene on Monday evening. Fundraisers are collecting thousands of dollars to help the families of the victims. The families are now wrapped in love and care by a community saying goodbye much too soon.

"To my Brian, and my Noel, you are in my heart," the victim's mother said.

In front of a crowd of hundreds mourning, Bryan Rodriguez's mother said her 17-year-old son and his 16-year-old best friend Noel Herrera are in her heart forever.

Tears filled students' eyes as they listened to his grieving mother.

Many wrote notes on white balloons about the lifelong friends which they released to the sky at a vigil for the victims.

"They're going to be missed very much here, it's not going to be the same, because they were both a great inspiration to all of us," said Dominick Pena, a classmate.

"Don't drink and drive, don't do that no more, there's so many innocent people dying," said Sandra, a mourner.

David Cordona was also standing on the sidewalk, and tried to warn the boys. Kemberly Richardson spoke with Cordona, who is telling his story only to Eyewitness News.

"I told the kid that was closest to me to move. As soon as he turned his torso, he got hit. He didn't have time to turn fully around," said Cordona.

"People in my class didn't even know him and they cried. Everybody loved him. He was just a great person to be around," said Enrique McNeil, a classmate.