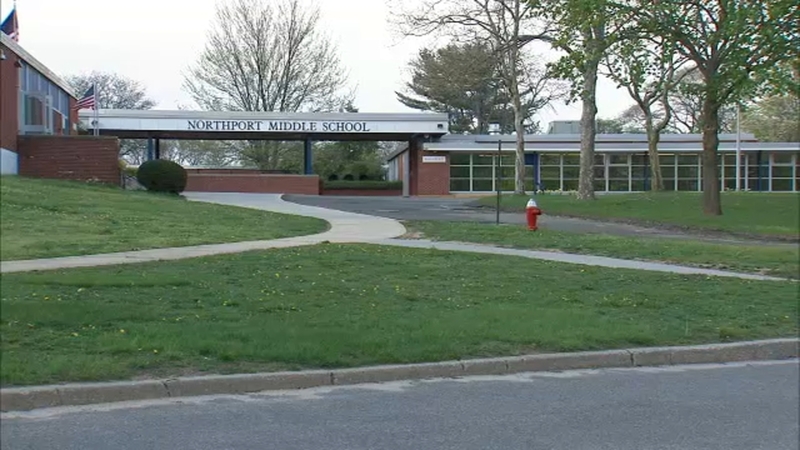 NORTHPORT, Long Island (WABC) -- Concerned parents of students at a middle school on Long Island are held a sickout Thursday after ongoing reports about foul odors.

Northport Middle School has been the repeated focus of inquiries related to air quality and the improper storage and disposal of potential contaminants.

"There's flooding all over the floors, the K wing smells like puke, it smells like mold everywhere, it's disgusting," eighth grader Lucas Yule said.

Many teachers and students have also reported getting sick from the conditions.

"My best friend, she has coughing fits every single day," eighth grader Aliya Zadrozny said. "And most of my friends, they just have really bad stuffy noses."

The sickout was held ahead of a district board meeting, where school officials were expected to recommend further testing. Protesters chanted "Protect our children" outside the school Thursday, some clutching photos of prior students who've died from blood cancers or those struggling with chronic illnesses.

The board voted unanimously to do the testing during a heated meeting Thursday night.

This month, Assemblyman Andrew Raia, who represents Northport, wrote the New York State Department of Health requesting "a longitudinal study of illnesses that may have been caused by the negative health conditions existing at Northport Middle School."

The situation had reached a breaking point in 2017 when the district temporarily shut down a portion of the school for renovations and clean up following revelations the district had been storing hazardous chemicals and occasionally, a vehicle, in a warehouse below classrooms.

Most recently, in October, the district ordered air quality testing and an examination of the school ventilation system by an outside contractor when students again reported foul odors.
In a letter to parents following those tests, Principal Tim Hoss indicated the school "did not identify the presence of any indoor air quality conditions that would prohibit the classrooms from being occupied by students and staff."

In a statement Wednesday, a spokesperson for DOH acknowledged Assemblyman Raia's letter and said the department is reviewing "cancer reportedly developed among former students of the Northport/East Northport Union Free School District."

The spokesperson said the Department planned to share its findings in early 2020 and added that "any further investigation will depend on the findings of the ongoing review."

Parents say they hope a third party conducts any new testing, because they've been down this road before.

"We had illegal chemicals that were stored in a warehouse underneath classrooms," parent Lauren Handler said. "We don't believe that was cleaned up properly."