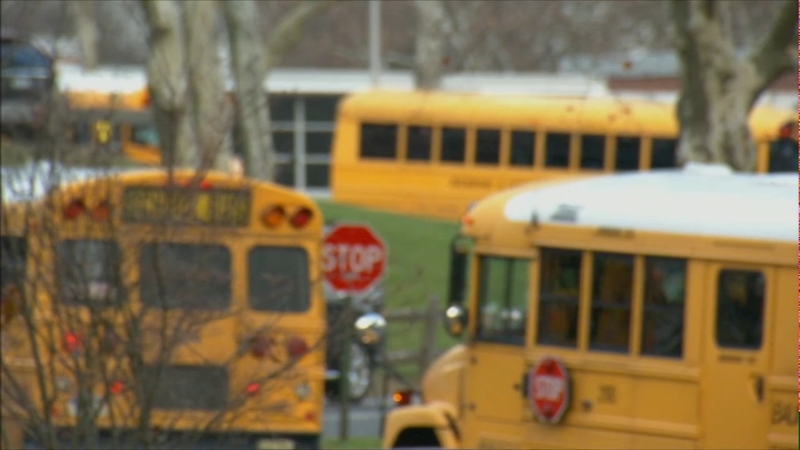 NORTHPORT, Long Island (WABC) -- Some parents of children who attend Northport Middle School are convinced their children are getting sick from toxic air in the building. They point to a school bus depot which is located next door to the school.

"She has lung inflammation which we found out from the pulmonologist," JeanMarie Valentino said.
The school district said a test of the air in the classrooms on November 7th showed no detectable concentrations of carbon monoxide.

Still, parents are requesting the district move the bus depot away from the building.

"It just makes sense to take one problem away and see the impact," said Nicole Mulholland, a parent.

Parents first became concerned about the air in the school last spring.

A May 30th inspection showed higher than acceptable amounts of airborne chemicals in several classrooms.

Teachers and students had been complaining of a noxious odor for weeks prior.

The inspection found that the district was storing petroleum-based products, including asphalt adhesives and roofing tars, in the basement underneath the classrooms.

The items were removed. A re-inspection completed in August did not identify any hazardous concentrations of the chemicals. But the wing of the school remains closed.

The school district says the safety and health of its students is its number one propriety.

The school board is holding a meeting Thursday night during which any new information would be released and discussed with parents.

There was no school in session or buses running when the testing was done on November 7th due to Election Day. Eyewitness News has reached out to the school district to see if they plan repeating the test on a day when school is in session and buses are running.