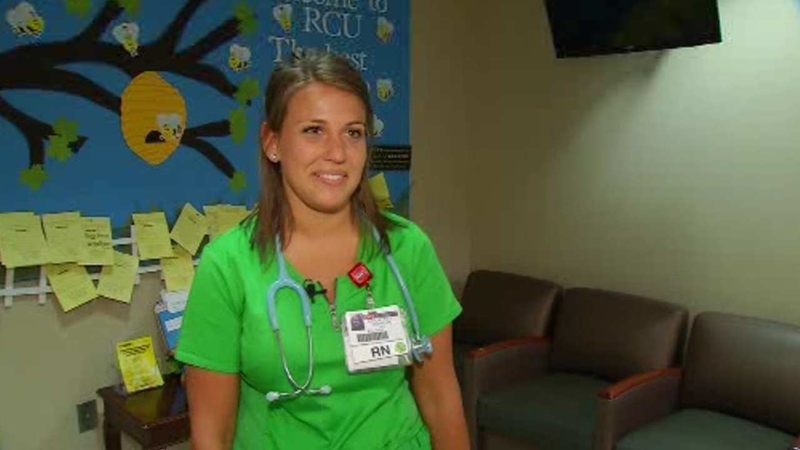 NEW BRUNSWICK, New Jersey (WABC) -- A woman from New Jersey who has been a nurse for less than a year is being hailed as a hero after she helped save a fellow passenger mid-flight.

Courtney Donlon was asleep on the flight from Las Vegas back to Newark when flight attendants asked if anyone with medical training could help a sick passenger.

"Right off the bat, you could see that the patient was wide eyed," Donlon said. "She could feel something bad was about to happen."

Donlon's work is usually in the respiratory care unit at Robert Wood Johnson, but she answered the call to assist on the plane. She became the point person, calling for oxygen and the defibrillator.

"They knew they could trust me," she said. "We asked for aspirin. So many people on board began digging in their bags for it. We found it. It's a blood thinner."
Donlon is 22 and has been a nurse for a little more than eight months. Bu there was no flinching or holding back. She took control, and everyone listened to her. And that included the pilot, who called back for an update.

Donlon's actions were the buzz at work, where her mom is a nurse in the cardiac unit.

"She was in the right place at the right time," Renee Donlon said. "Her skills kicked in, and she used them to the best of her abilities."

Donlon's sister is also a nursem on the very same floor.

"After a long trip, she's sleeping," Nicholle Black said. "She jumped up, got into the zone and did what she had to do."

Donlon didn't want to leave out a second nurse, named Valentina, who helped monitor the patient until she was handed off to EMS in South Carolina.

She said there's nowhere else she'd rather have been than saving the life of someone in need.