De Blasio said the new system will begin serving all five boroughs in 2020.

The expansion includes two new routes that run from Staten Island and Coney Island. Two other routes will be modified to add stops in the Bronx and Brooklyn.

New stops include the Throggs Neck/Ferry Point Park section of the Bronx on the Soundview Route and another stop will be added to the Brooklyn Navy Yard on the Astoria Route. 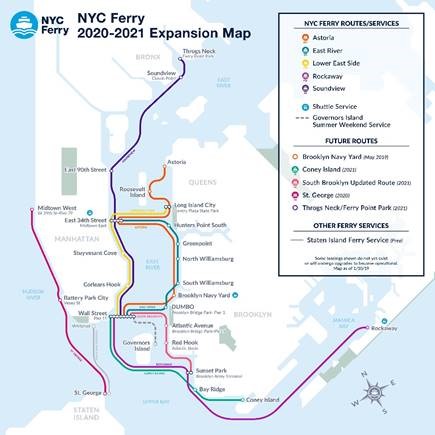 "In less than two years, NYC Ferry has become one of the most reliable, affordable, and beloved transit systems in the city," said James Patchett, New York City Economic Development President and CEO. "Expansion of the system means getting even more New Yorkers where they need to go, increasing access to good-paying jobs, schools, and other neighborhoods, all for the price of a subway ride. We are proud to have delivered an invaluable asset to the city that makes all five boroughs fairer and stronger."

Launch of the Coney Island Route in 2021: The Coney Island route will launch in 2021, with a stop in Bay Ridge, before ending at Wall St. /Pier 11, an anticipated total run time of 35 minutes from start to finish. The route is estimated to serve approximately four thousand NYCHA residents that live within a half-mile radius of the landing.

Extension of the Soundview Route in 2021: A new landing in Throggs Neck/Ferry Point Park will be added to the Soundview route. Launched in August 2018, the Soundview route connects residents and workers in the East Bronx with stops on Manhattan's Upper East Side (E. 90th St.), Midtown East/E. 34th St. and Wall St./Pier 11. Riders boarding at the new Throggs Neck/Ferry Point Park ferry stop are able to transfer for free to the East River, Rockaway, Astoria, and South Brooklyn routes at East 34th St. and Wall St. /Pier 11. The extended route will take approximately 51 minutes from start to finish.

Modification of the South Brooklyn Route in 2021: The South Brooklyn Route will be reconfigured to start from Sunset Park/Brooklyn Army Terminal (BAT) instead of Bay Ridge, which will be added to the new Coney Island Route and will no longer stop at DUMBO/BBP1. Alternatively, DUMBO/BBP1 will only be accessible via the East River Route. Starting in 2021, the new estimated run time will be 34 minutes from start to finish. In addition to current route reconfiguration, future modifications may occur to expand service to emerging job clusters.

Modification of the Astoria Route in 2019 to include the Brooklyn Navy Yard: This May, a stop will be added at the Brooklyn Navy Yard on the Astoria Route. The Navy Yard, which currently serves as NYC Ferry's homeport, is undergoing a historic expansion of the campus and is expected to more than double its workforce by 2020. The Navy Yard ferry stop also offers a new commuting option for the many surrounding neighborhoods along the stretch of waterfront, including over 14,000 NYCHA residents. Starting this May, the Astoria Route will take 45 minutes from start to finish.