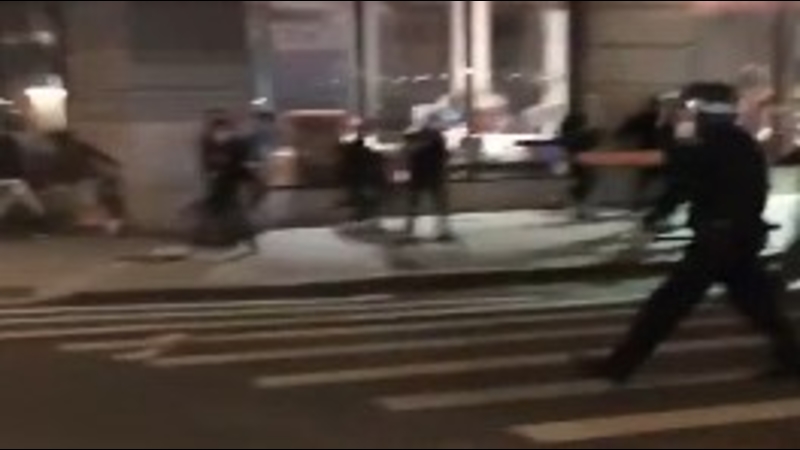 NEW YORK (WABC) -- New York City Mayor Bill de Blasio has adjusted his stance on police behavior during protests related to the death of George Floyd after incidents involving an officer driving into a crowd of people and another officer pulling his gun on protesters.

Previously, he said the officers were put in an "impossible situation."

"There is no situation where a police vehicle should drive into a crowd," de Blasio said Monday about the NYPD SUV driving into a group of protesters in Brooklyn holding a metal barricade.
EMBED More News Videos

Additionally, the mayor called for the officer who pulled a gun on a group of protesters to be fired.

"Any officer who does the wrong thing, there needs to be consequences," he said. "And they need to be fast."

He also said he was encouraged by a supervising officer who immediately stepped in.

"There is a video going around of a police officer in the middle of a situation that admittedly looked chaotic, where protesters were in front of a police officer, that police officer drew his gun," he said. "That, to me, seeing that video, was absolutely unacceptable. I don't know all the circumstances, and we must know all the facts...but I can say as a New Yorker, as your mayor, as someone who understands the vast majority of protesters are there peacefully, and even those with violent intent are also human beings. It is not the place of an officer to pull a gun in the middle of a crowd knowing there are are peaceful protesters in that crowd."

Both the mayor and Police Commissioner Dermot Shea said the NYPD will be very aggressive with looters Monday night.

"As many protesters were leaving for the day, we started to see some criminal activity, more in Manhattan, and that is some of the looting," Shea said regarding Sunday's protests. "Still tallying totals in terms of arrests, injuries. We start with the most important thing, loss of life. Did have some dangerous incidents attributed to the protests, thankfully no lost life. I thank the officers and the protesters, community leaders, that came out...We ask all New Yorkers to do it safely."

Shea says looters and other criminals will have their cars seized.

"What a good day that turned bad unfortunately, and I think it leaves a black mark on everything that is accomplished," he said. "It's hijacking a cause. You had such good stories coming out...not always agreeing, but agreeing to see and hear each other and listen to each other and knowing it's a long journey to get to where we want to be. That changed last night with the looting. We have to recognize that is where the protest ended. There was no agenda for a protest that is breaking into stores and stealing property. We will have a robust amount of officers, plainclothes and uniform, tonight. anyone who is coming to, whether it is outer boroughs or to Manhattan, with the intent to take advantage of people during this very difficult time. We will ensure we do everything to make sure you are prosecuted to the fullest extent of the law. If we see you driving a car into Manhattan to facilitate you doing that crime, you are going to lose your car."