NYC digging out after major snowstorm; travel advisory issued due to icing 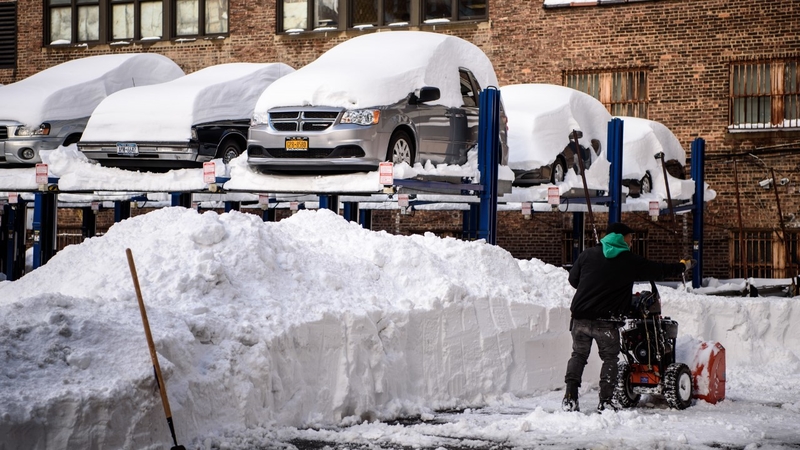 NEW YORK CITY (WABC) -- In the wake of the second largest snowfall in the city's history, Mayor de Blasio issued a travel advisory for Monday night through Friday night, January 29th. As nighttime temperatures drop to near or below freezing through Friday, the melted snow can turn to black ice, causing dangerously slick roads. Pedestrians are also urged to be careful while walking on icy sidewalks.

The city is continuing to dig out after the snowstorm brought the city to a standstill Saturday, dumping more than 2 feet of snow in parts of the five boroughs.

Here's a breakdown of the latest efforts to get NYC back to normal:

PLOWS/STREET CLEARING
On Monday, Mayor Bill de Blasio said much of the effort Monday is being directed toward smaller streets, especially in Queens and Staten Island. Queens is where the most amount of snow fell in the blizzard, and that's from where Eyewitness News has received the most street clearing complaints. A mini school bus even got stuck in Woodhaven. Click here for more details.

He said nearly half the sanitation department's plows -- 920 of them -- are focused on Queens alone. The city also sent 170 front end loaders to Queens.

"Some of those streets a plow is not effective. The snow is too deep and there is not enough room, so we are literally going in and dragging it out," said Sanitation Commissioner Kathryn Garcia. "Queens is our first priority for today to make sure we get all of those small streets open."

Garcia said workers will put the snow in dump trucks and take it away, and also begin melting operations across the city.

SHOVELING DEATHS
There have been at least five snow-shoveling deaths across New York City, according to an FDNY official. Three were in Queens, one was on Staten Island and another in Brooklyn.

Officials said all who died were men ranging in age from 51 to 80, and their deaths appear to be heart attacks that occurred while they shoveling snow.

SIDEWALK CLEARING ALERT
Mayor Bill de Blasio said businesses and homeowners need to make sure they're clearing off the sidewalk in front of their businesses or homes.

The mayor said a 3 to 4 feet wide path is all that is needed, and that the snow should be shoveled off to the side - not into the street.

SHOVELING HELP
The city is looking to hire temporary help to clear the snow from city-owned property. The jobs pay $13.50 per hour. Click here for details.

MASS TRANSIT
All city public transportation is back in order following the shutdown of MTA bus service and above-ground subway service.

Some issues have persisted on the LIRR. Click here for more information.

HISTORIC STORM
Saturday's blizzard goes in the record books as the second biggest in New York City's history. The final tally was 26.8 inches of snow in Central Park -- only 1/10 of the top slot, in which 28.9 inches fell in February 2006.

SNOW TOTALS
Queens won with the most snowfall across the city, but how much did other parts of the city get? Click here to see the list of snow totals across the region.

Do you have photos or videos of the storm that you want to share with us? Post them on Twitter and Instagram using the hashtag #abc7ny.
Related topics:
weathernew york citysnow stormsnowwintersnowstorm
Copyright © 2022 WABC-TV. All Rights Reserved.
TOP STORIES
At least 46 bodies found in 18-wheeler in San Antonio
3 dead, at least 50 injured after Amtrak train derails in Missouri
Video: Giuliani slapped on back inside supermarket, worker arrested
"Nobody saw..." New questions after a girl drowns in a rented pool
Video shows man stealing puppy, riding off on scooter in NYC
AccuWeather: Picture perfect
Actress Mary Mara dies at 61 after drowning in river: police
Show More
Westchester Co. reproductive healthcare legislation up for vote
2022 Jimmy Award finalists step into the spotlight
NYC mayor takes aim at garbage piles, illegal dumping
'Full House' star shoved by police during Roe protest, video shows
Truck carrying fireworks catches fire on I-287 in NJ
More TOP STORIES News