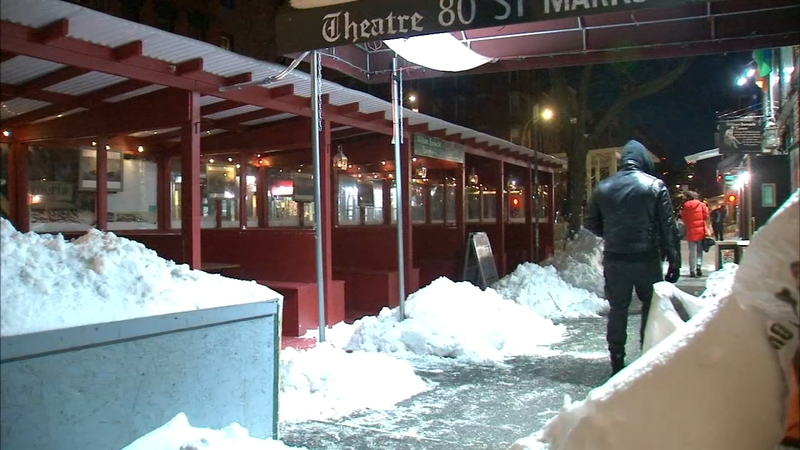 NEW YORK CITY (WABC) -- New York City is digging out of its biggest snowfall of the season thus far Thursday in what amounted to the first significant accumulation in years but also luckily fell short of the potential high end totals.

City leaders were pleading with New Yorkers to stay out of the way of thousands of sanitation crews, but even with salting and plowing, the roads were treacherous in places.

Many residents who parked on the streets were busy digging their cars out of the snow. Although, some decided they were better off just waiting.

"I'm going to leave it parked for a week or two until it rains and melts," Riverdale resident Peter Sampson said.

But even before the first flakes fell, the first big snowfall of the season was doomed to be a gloomy disappointment for more than a million of its schoolchildren.

Mayor Bill de Blasio made it clear as the city began preparing for the storm that students would miss out on the magic of a traditional snow day and would have to log in and work as usual.

He said they have lost too much instruction time already due to the coronavirus pandemic, though he admitted to mixed feelings.

"As a parent, and I was a kid once myself, I have to say I feel a little sad that the snow day we used to all know may be gone," he said. "Because it's really not going to be a day off if we have a snow day.".

The mayor announced that schools would be open for in-person learning again on Friday.

Local eateries also took a hit, because on the heels of indoor dining being suspended due to the uptick in COVID-19 cases, the snow forced the city to shut down outdoor dining as well.

The businesses did not have to remove their outdoor setups, however, with city officials promising to plow around the structures as best they could.

"What we can say with assurance is that in Manhattan right now Manhattan did pretty well in this storm in Manhattan, we're going to have outdoor dining up and running tonight," de Blasio said.

Restaurants were able to reopen for outdoor dining citywide at 6 p.m. on Thursday.

The city's worst fear was that these structures would collapse under the weight of the snow and block access for emergency vehicles. But it didn't come to fruition.

"The outdoor dining structures did well structurally for the most part from our frontline reviews from what we saw," New York City Sanitation Commissioner Ed Gracyson said.

Despite the wallop of snow, the MTA continued to operate a normal schedule. Additionally, NYC Ferry service has resumed on all routes.