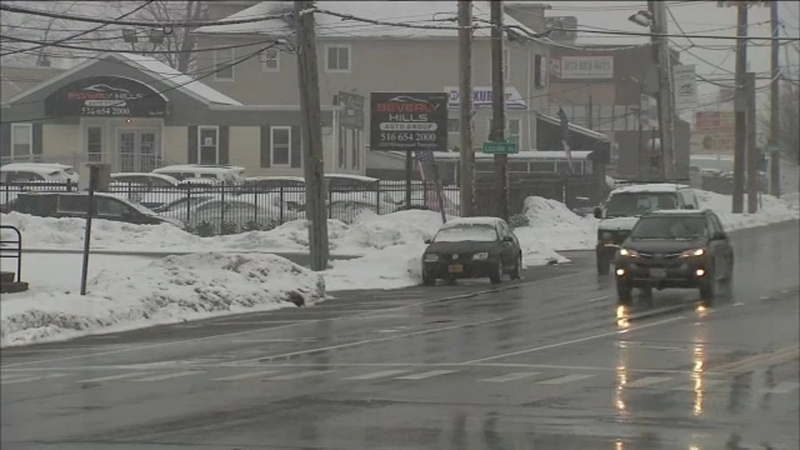 NEW YORK (WABC) -- Sunday's quick-moving snow caused some disruptions, shutting down some outdoor dining and closing some vaccine centers, but no major problems were reported.

Many locations received six inches or more in a heavy band that set up just north and west of New York City, but other parts of the area only got a coating.

Drivers were asked to avoid the roads ahead of Sunday's snow and the Department of Sanitation had 200,000 tons of salt and extra plows ready to go.

Salt trucks were working around the clock, but the roads were still slick.

In Manhattan, officials are investigating if the weather conditions were responsible for a a tree that fell down at 48th and 9th Avenue. No injuries were reported.

Open Streets roadway dining was suspended due to the storm Sunday, but sidewalk dining was allowed to go on.

Alternate Side Parking Regulations are suspended through Friday, February 12.

Officials did not have to make changes to ferry or mass transit schedules.

NEW JERSEY
In New Jersey, transportation officials took a proactive approach ahead of the snowstorm.

Steve Shapiro, a spokesman for the New Jersey Department of Transportation said Sunday afternoon that roads were passable, but there were still plenty of areas covered in snow and slush.

He said the main concern going into Sunday night was the falling temperatures causing roads to refreeze.

"I think that's it just once again we appreciate people staying off the roads, if someone must be out driving, please make sure you clear the snow and ice off the car first and extra travel time, and definitely take it slow," Shapiro said. "And again, if you can stay home and watch the game. That's the best fit for tonight."

Lucy Yang has more on how New Jersey was battered by Sunday's winter storm.

Crews on Long Island took to the roads as the latest snow storm hit the area. Unlike Monday's nor'easter, Sunday's storm was weaker and strong winds and flooding were not projected.

However, on Sunday afternoon, a home heating oil delivery truck on Sunrise Highway lost control and flipped in the center median.

The driver was not seriously hurt but the truck, which was carrying over 3,000 gallons of oil, leaked and prompted the road to be shut down for cleanup.

Because it was on a Sunday, fewer people were out on the roads and Hempstead Town Supervisor Don Clavin said that was a good thing.

"We are asking residents to stay in, take cars off the road, don't go out, it's supposed to be a quick freeze after this storm and we want to get these roads cleared as soon as possible," Clavin said.

Overnight crews pretreated the roads and so by mid-morning, conditions weren't too bad.

RELATED: The AccuWeather forecast for the NYC, Tri-State area

While the snow did start later than expected, Suffolk County was ready.

"We've been removing sand from the yard, salt from the yard here, we've have 16,000 tons still on hand, so we've got a really great supply," Suffolk County Executive Steve Bellone said.

"Every time we get a new projection, we get more and more inches," she said. "So we are going to be watching that and tracking that very carefully."

Long Island vaccination sites at Stony Brook and Jones Beach will be closed Sunday because of the snow. Governor Cuomo said the Long Island appointments would be rescheduled over the next week.

"If you have an appointment, you will not lose your spot," Cuomo said, urging patience.

Click here to see a full list of vaccination sites closed on Sunday in New York and New Jersey.

RELATED: "Rising Risk" docuseries explores how those rising sea levels will play out in the lower Manhattan of the late 21st century. Watch now on our CTV apps for Fire, Roku, Apple TV and Android TV
MORE ACCUWEATHER RESOURCES