NYC snow: 3 fatalities as a result of nor'easter's snow 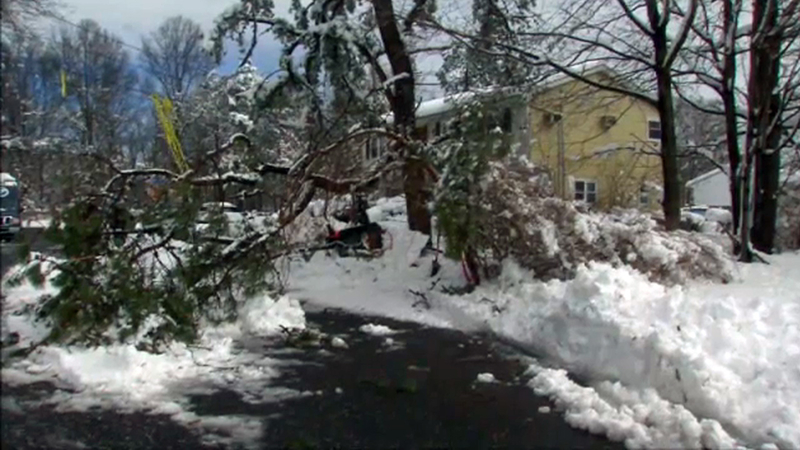 Long Island digs out from nor'easter

NEW YORK (WABC) -- Yet another nor'easter dumped another round of wet, heavy snow that continued into Thursday morning, and the storm proved to be both dangerous and deadly.

Residents were spending the day digging out from the fourth nor'easter in three weeks, with many across the region still reeling from the first three that downed trees and power lines and left tens of thousands in the dark.

Travel was treacherous, particularly on the roadways, where hundreds of accidents were reported. At least one involved a fatality on Long Island, and another woman died in Bellmore while shoveling snow. Authorities say they tried to revive the 62-year-old woman, but she died at the hospital after suffering a heart attack. Gov. Phil Murphy said a man who was believed to have died in an accident in New Jersey was is actually in the ICU. Further details were not released.

Separately, Toms River police said an 87-year-old woman with dementia and Alzheimer's was found dead in the snow Thursday morning. Her body was found about a mile from the mobile home park where she lived, about two hours after she was reported missing.

Long Island and particularly Suffolk County bore the brunt of the storm, which lingered overnight and dropped more than a foot of snow in some parts of the region. Bay Shore and Patchogue led the way with 19 inches of snow, while the city recorded about 8 inches in Central Park. Click here for snow totals across the New York area.

Stacey Sager reports on the storm cleanup on Long Island.

In a rare treat for New York City students, public schools there joined scores of others in canceling classes Wednesday. But city schools reopened Thursday, even as a few dozen schools across the area decided to declare another snow day.

Reporter Kemberly Richardson reports on how Brooklyn is coping.

Reporter Rob Nelson is in Queens talking to people about the latest snow storm.

Residents in New York City's northern suburbs were on edge in anticipation of the storm, with lingering unpleasant memories of power outages from the previous storms that lasted days on end.

Local municipalities loaded up on salt and sand ahead of the storm's arrival in an effort to make the roads as safe as possible. Still, residents were urged only to drive if absolutely necessary.

The bulk of the dangerous, wind-driven snow and sleet walloped New Jersey, Maryland, Delaware and parts of eastern Pennsylvania before heading off to Nantucket early Thursday.

New Jersey Governor Phil Murphy declared a State of Emergency, authorizing the State Director of Emergency Management to activate and coordinate response and recovery efforts. State Police issued a commercial vehicle travel ban for the entire lengths of I-78, I-80, I-280, and I-287, but the ban was lifted at midnight.

A.J. Ross reports on the nor'easter's impact in New Jersey.

By Thursday morning, State Police reported 516 motor vehicle accidents and 598 motorist aids. That is the running total since noon Tuesday.

Some 80,000 people in New Jersey lost power, and traffic on the upper level of the George Washington Bridge came to a standstill Wednesday night due to a jackknifed tractor-trailer and fuel spill at about 8 p.m.

The dangerous conditions were also blamed for several accidents on Long Island, including a crash involving two tractor trailers on the Long Island Expressway in North Hills.

Coastal flood warnings were posted for shore communities and the approaching high tide added to concerns about potential flooding on Long Island.